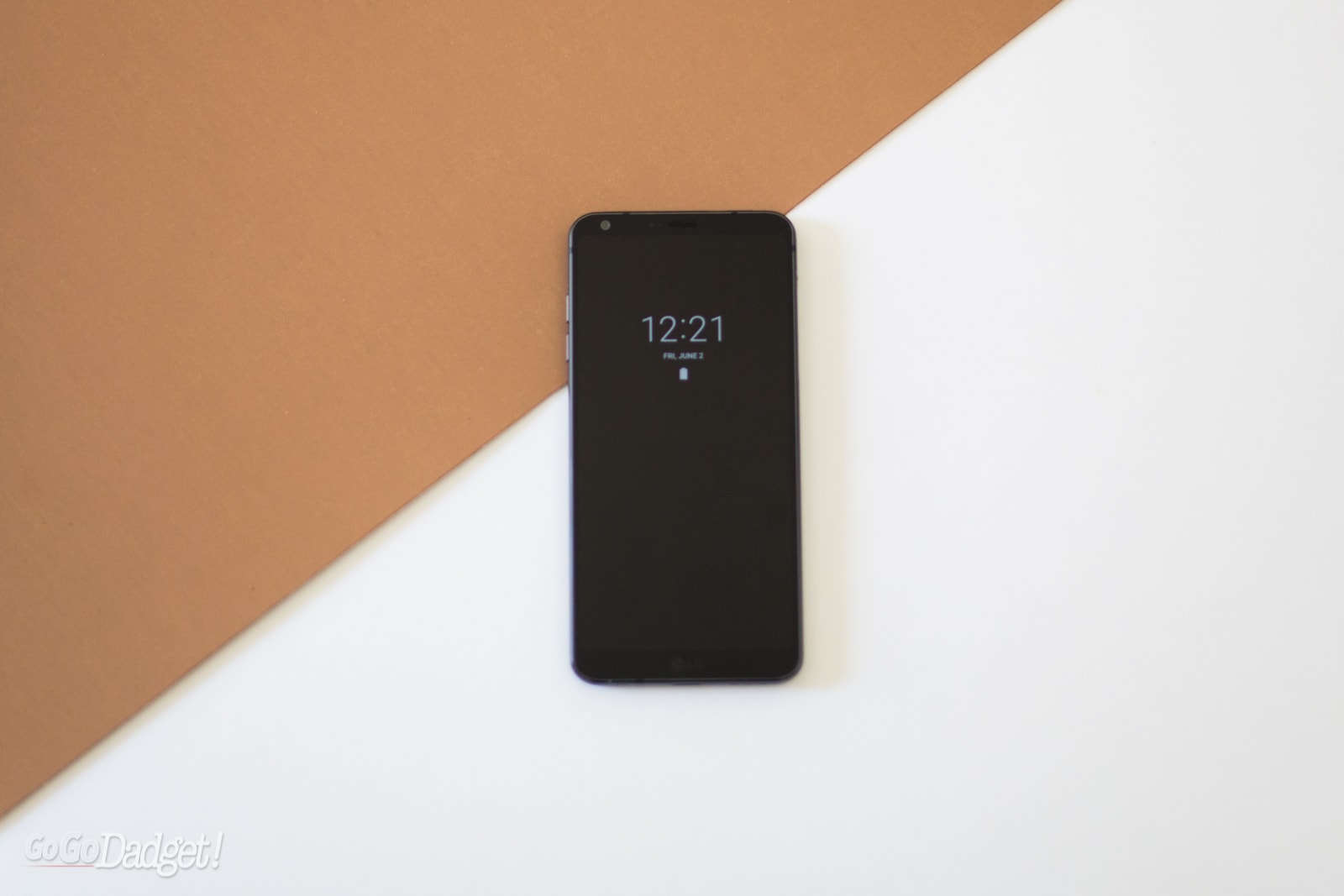 I’ll never judge another parent for what they do to calm, entertain, or settle a child. That includes those folks’ who refuse to give their kids gadgets. If that works for you, awesome. If it doesn’t and you hand your kids your iPhone when they’re fighting in the backseat, that’s awesome too. Whatever floats your boat, you’re the king of your castle.

We don’t mind handing gadgets to our kids for videos, games, and “writing” (which is just mashing buttons and finding emojis and sending them to friends and family) — within reason. Our kids aren’t tied to devices, but they also enjoy them. Happy medium.

The LG G6’s amazing screen threatened to get me addicted, though. 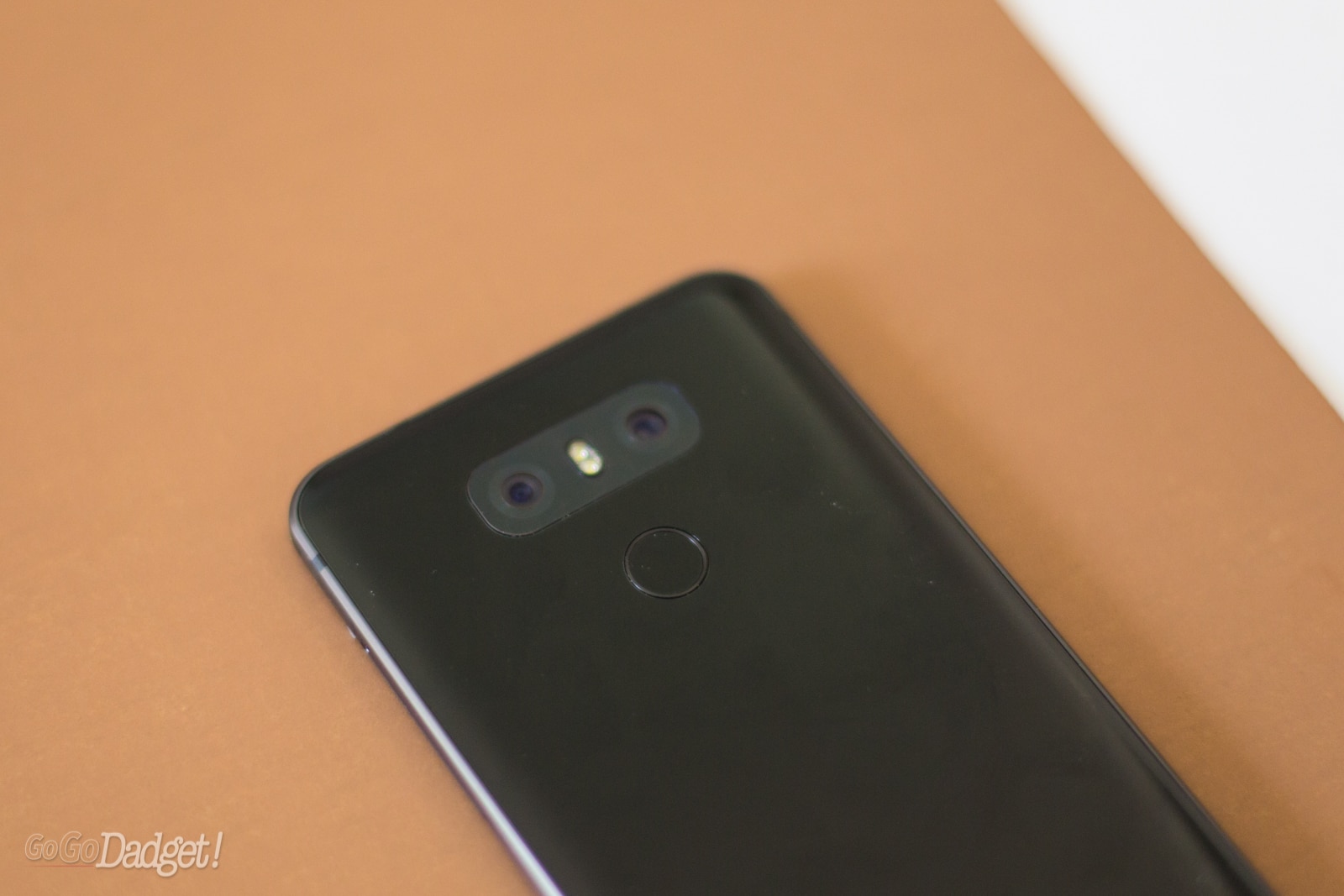 The LG G6 is not an exceedingly big phone, nor does it feel weird to hold. It has dual cameras on the back (opting for a second wider angle lens instead of a telephoto lens like the iPhone 7 Plus) right near the fingerprint sensor. The USB-C charging port is on the bottom, along with the speaker/microphone grills, volume buttons on the side, and it has a headphone jack at on the top.

The main event here is the screen. It has an 18:9 ratio — which is very wide (or tall when held vertically) — and there are almost no bezels on the phone, which is how it keeps its manageable size. This screen also includes Dolby Vision HDR, which gives you better blacks, more depth and color from what you’re watching (if it’s presented in HDR). More on this later, it deserves it’s own section.

Something you might not know, though, and I didn’t know this until I was given the heads up: the LG G6 is rugged as hell against the elements. Not necessarily drops or scratches, but it has an IP68 rating, meaning it’s sealed against dust and water resistant up to 1.5 meters for up to 30 minutes. It also passed 14 different military standard 810g tests.

The rep I was talking to at LG said he loved to respond to texts and messages in the shower with it, which I thought was awesome, so I tried it. It worked, just not well enough for me to say it was one of my favorite parts, because visibility through beading water isn’t great and the touch controls became hit-or-miss. I can’t imagine sending anything beyond “OK” to my wife texting me to stop taking 45 minute showers with gadgets.

It was still pretty cool to watch The Chef’s Table while washing my armpits.

Outside of the shower, the design is lovely. It was easy to hold, the fingerprint sensor was blazingly fast and doubled as the sleep/wake button, and it was nice to have that headphone jack while traveling. The speakers did their job, and it was fun to show everyone all the cool things it could do. 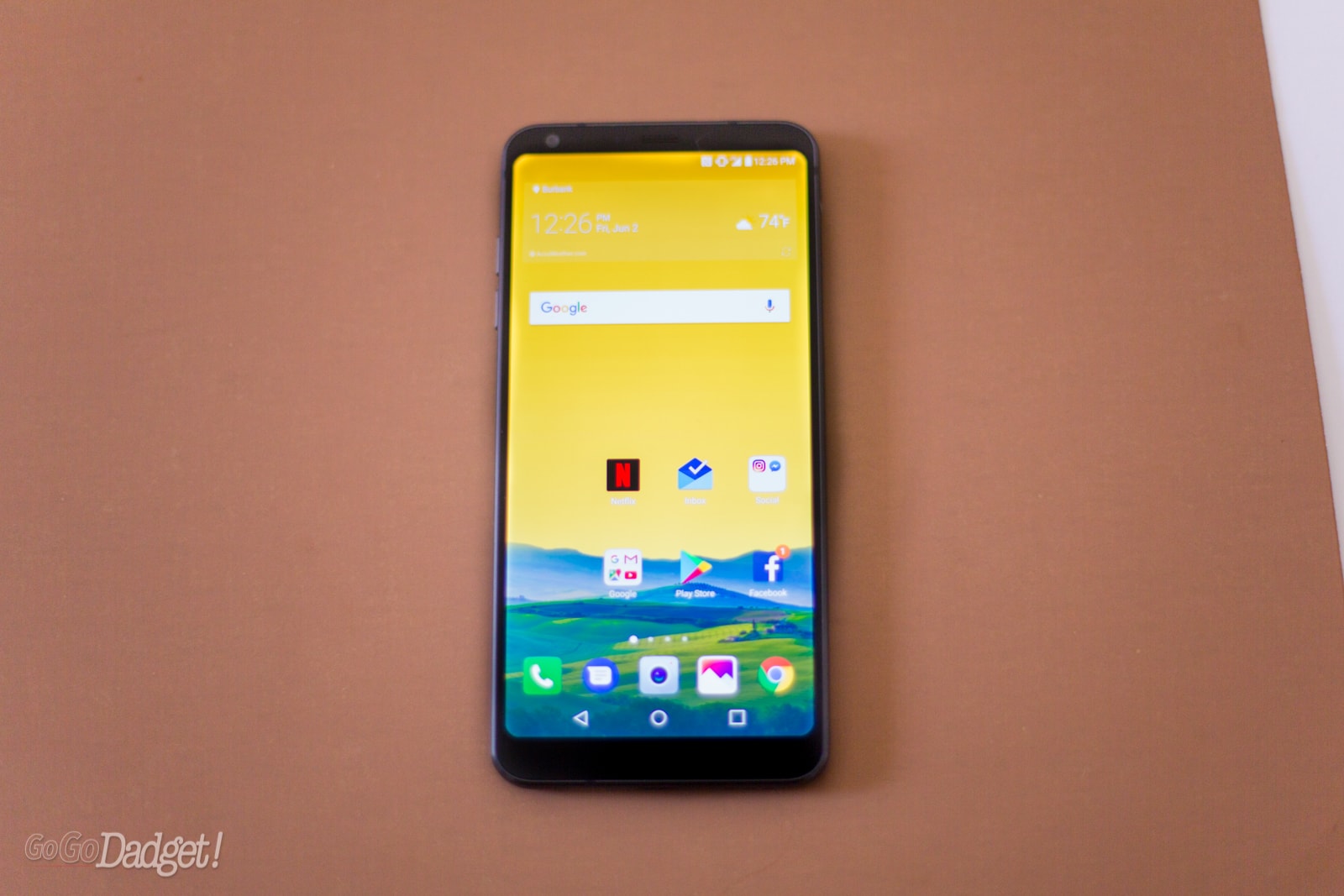 We aren’t all about specs here, but we need to make just a quick mention of the screen’s specs because it’s really the first of it’s kind: it’s a 5.7″ QHD Plus FullVision Display (2880 x 1440) with 564 ppi. Those are some insane numbers, and one of the coolest parts of the display isn’t really how big and beautiful it is, it’s that the corners of it are rounded. It’s a subtle difference from other phones, and I hope you can appreciate that as much as I do. 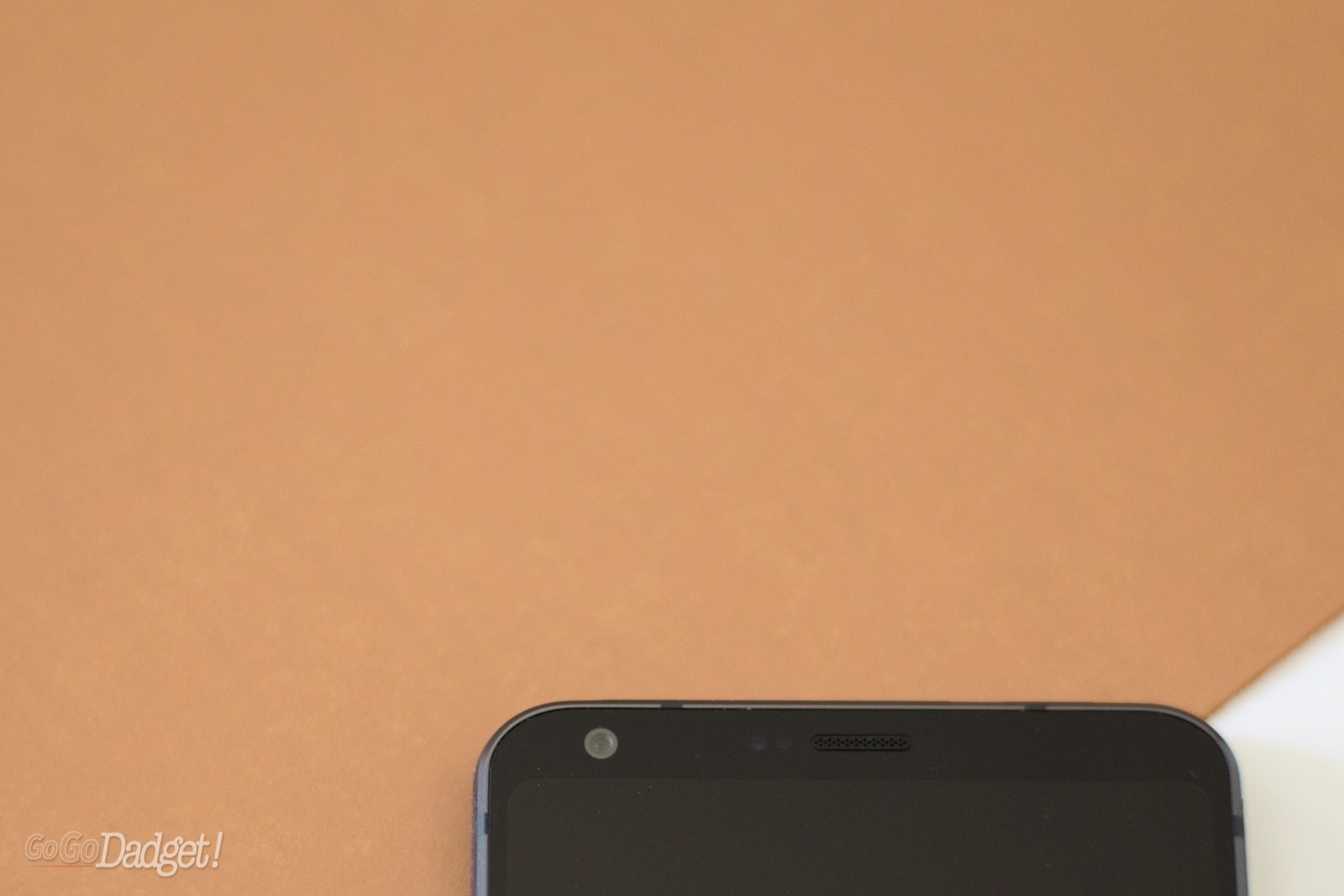 When an app is designed to make use of it, it’s incredible. Take Netflix, for example. At the time of reviewing, the LG G6 was the only phone that could make use of Netflix’s HDR offerings. There weren’t a ton mind you, but almost all of the new Netflix Original Series are being presented in this way. I could immediately tell the difference between HDR and non HDR, especially when viewed side-by-side with my wife’s iPhone 7 Plus:

What is HDR? Dolby Vision is HDR (but it isn’t the only HDR, there’s also HDR 10, and usually this tech is for 4K and Ultra Resolution TVs and monitors, so packing it into a phone is super cool) that has incredible reproduction of brightness, contrast, and color. Basically, if you want the best picture possible, you want Dolby HDR.

When an app isn’t designed for the larger screen, the black bars that show up aren’t that distracting, and sometimes you have the option to stretch the app to the screen, but you might lose some of the app this way.

The best experience I had with the screen was traveling back to visit family in Ohio. I loaded the hell out of this thing with movies, shows, and entertainment. I was traveling alone, so I didn’t have to pass it off to a kid, either, and enjoyed stunning content the whole time — and the battery life barely took a hit. I topped off at each layover, and of course have an external battery with me almost at all times, but it barely dipped below 85% each leg.

The only issue I had with this screen was seeing it in direct sunlight in the desert (you didn’t know Ohio had deserts? It doesn’t, you’re right. This was taken before the trip back to the other coast). No joke: 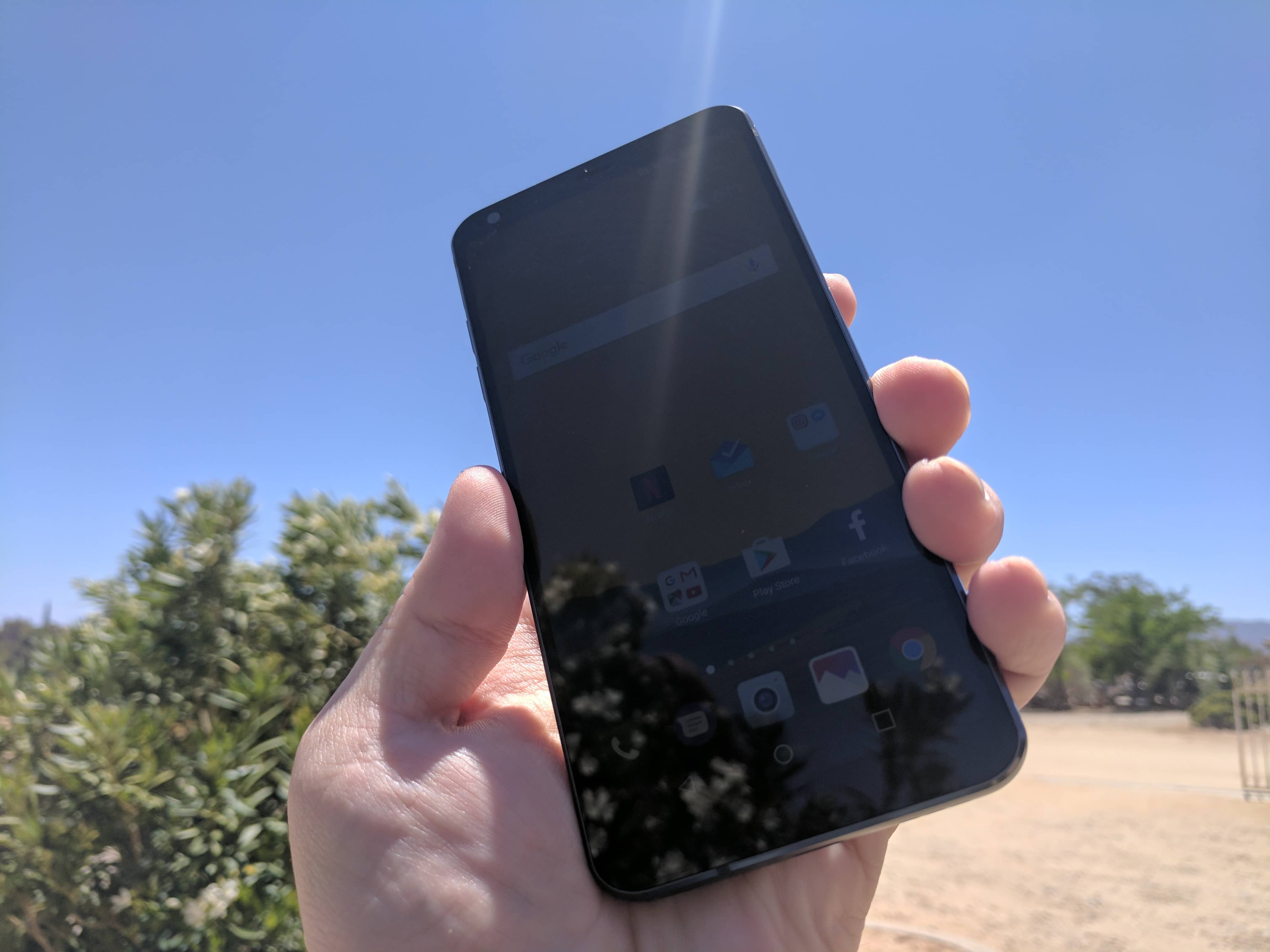 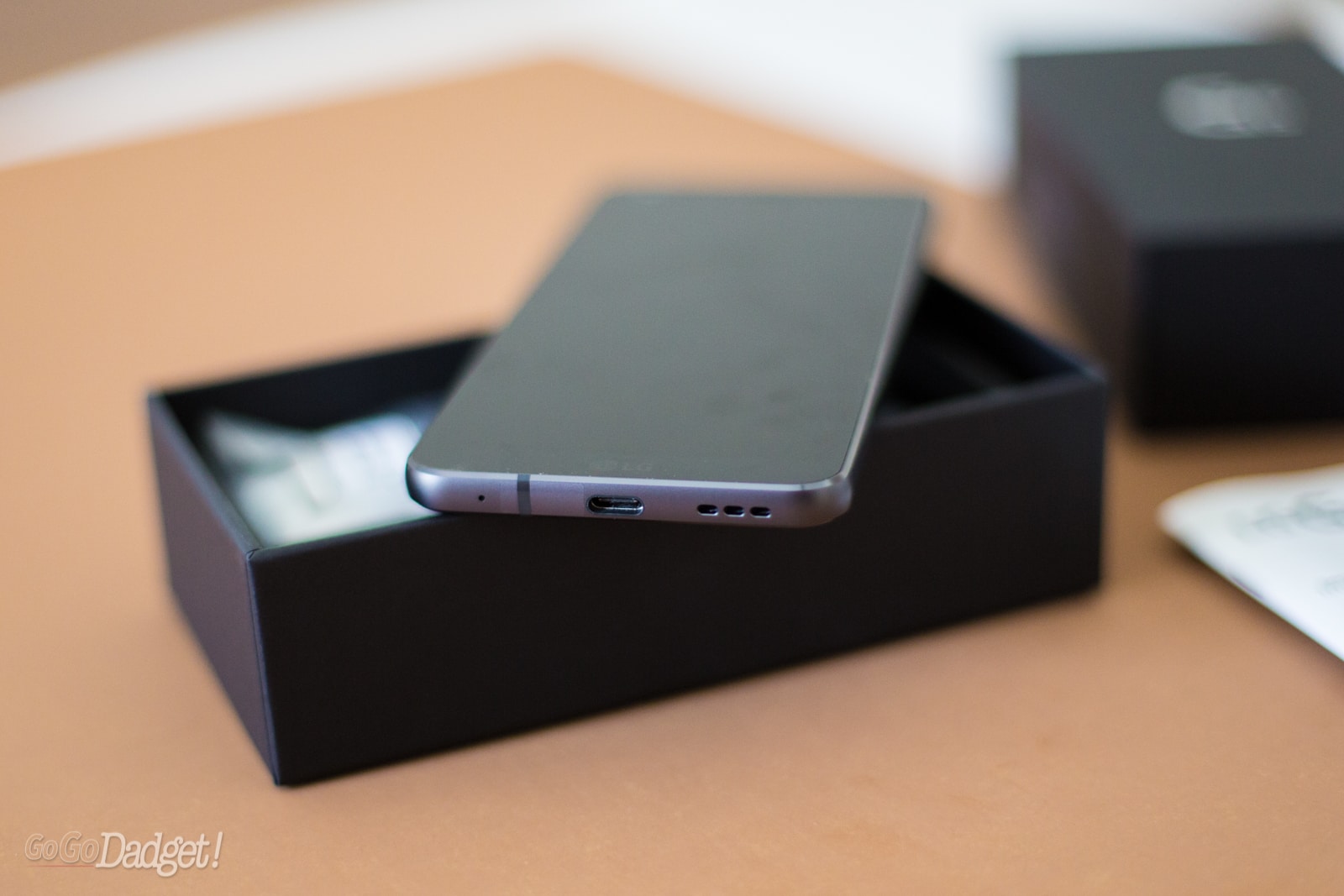 The LG G6 is LG’s flagship device, meaning it’s their nicest, most up-to-date and modern phone. It also costs a bit less than, say, an iPhone or a Samsung Galaxy S8+ (which has a comparable screen, but is less military-rated against the elements). We’ll get to the price near the end, but I want to mention the reduced price before I got into my only other gripe with the device.

Sometimes it got a little bit sluggish. Switching apps, the keyboard popping up, scrolling — every once in awhile it would perform these tasks slower than usual, but it wasn’t killing me by any means. It was just, well, noticeable. The processor isn’t top-of-the-line for this year, but it does have 4gb or RAM so it should handle most of what you throw at it.

The UI itself is clean and not packed-to-the-gills with bloatware, so there are no qualms with that, and the information the phone displace while asleep (you can have the screen always on) is everything you could need.

It also charged very quickly, making use of QuickCharge 3.0 through it’s USB-C port. I’m so happy phones are moving away from Micro-USB (the LG G6 also has wireless charging, which I did test — it works, it’s convenient, but it’s slower). 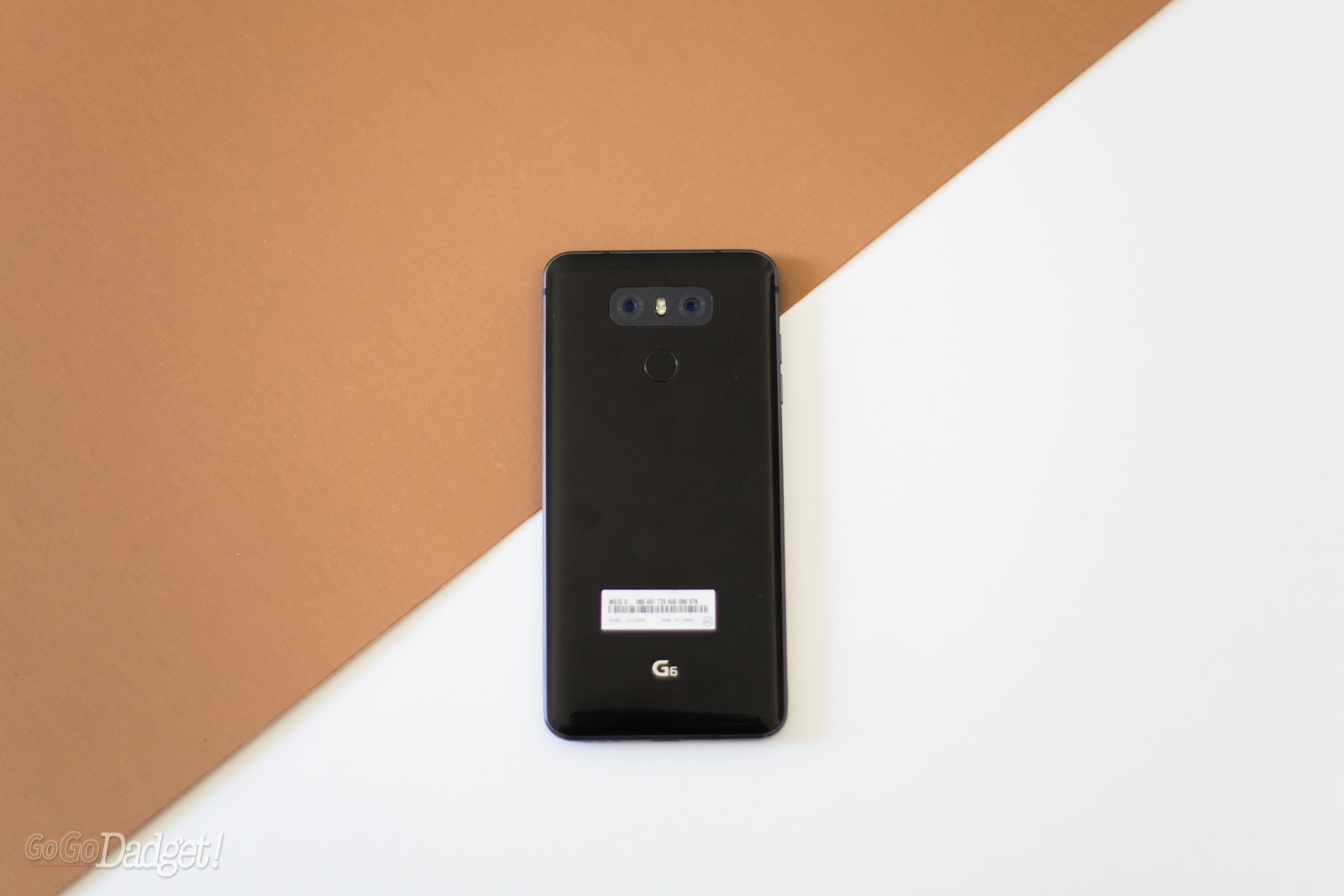 The camera on the LG G6 is very, very fun. While quality-wise you’ll notice it falls somewhat short of the more pricier competitors like the Pixel XL and the iPhone 7, it has a lot of things going for it, from gesture snaps to an interesting extra-wide angle lens to get the bigger picture.

It also takes a good picture, which is probably the thing you’re most curious about.

Switching between the normal lens and the extra wide lens is smooth, and it looks neat on the screen. Half the fun is switching back and forth! Beyond that, the gesture controls are very welcomed and worked nicely for me. Using simple hand gestures, you can have the camera take pics from afar! Video also looked nice in a lot of light, with Optical Image Stabilization keeping the videos from having too much shake, but I could still see signs of the “wobble” some Android phones have.

Personally, too, while the wide-angle lens is neat, I’m not a huge fan of the aesthetic of it, but that’s just personal opinion.

Here’s the thing, though: None of the photos I took using the LG G6 uploaded and saved to my Google Photos somehow. They just… disappeared. Because of that, I’ll commit the biggest sin and point you here to take a look at some shots. Just come back, please?

This is as good of a time as any to tell you, especially if you’re parents, to back up your photos in multiple different ways, on multiple hard drives and cloud storage. Seriously, do it. 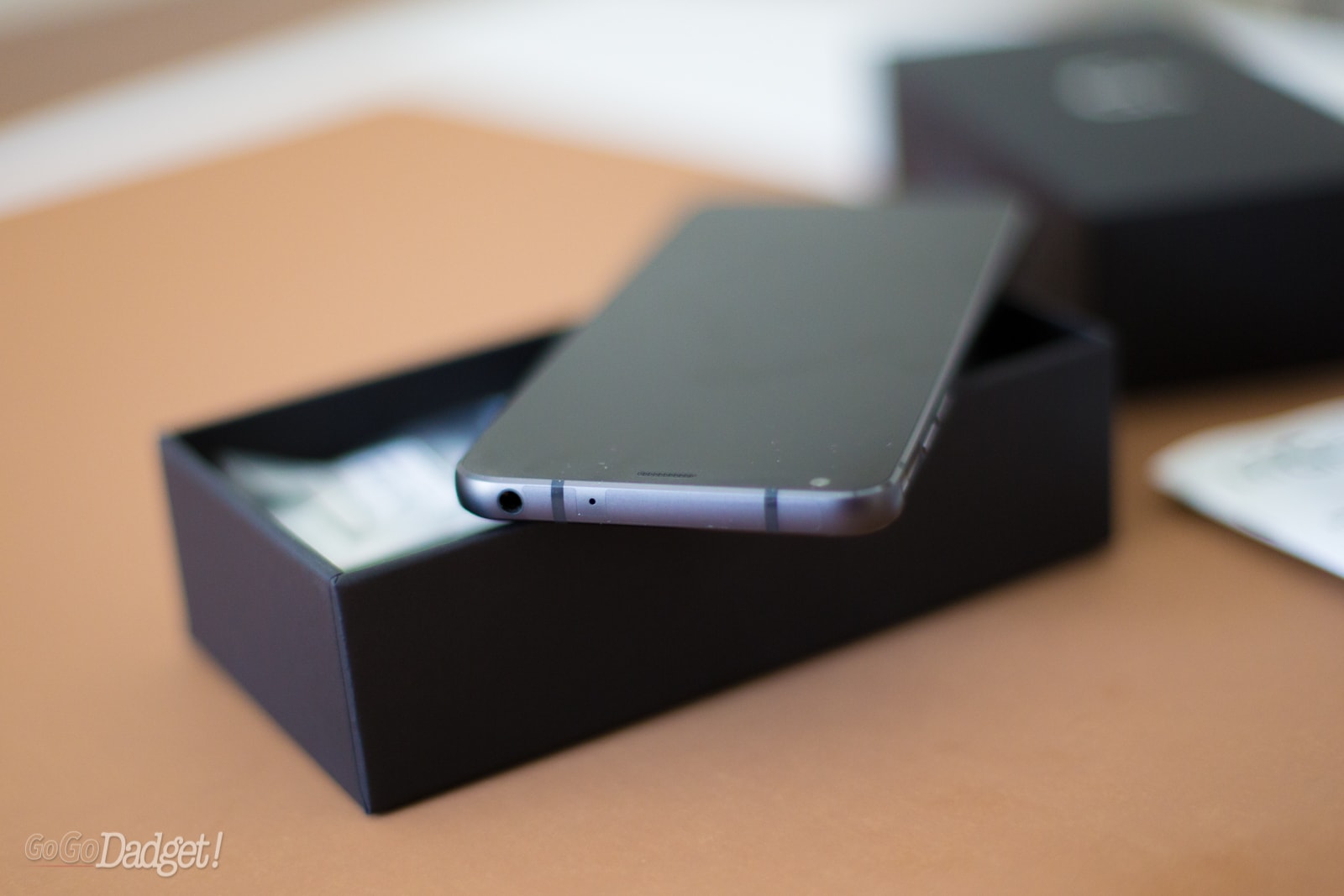 Look, every device is gonna have downsides. The LG G6 is no exception, but there isn’t anything holding me back from recommending the phone. Here are my gripes, plain and simple, and most have already been mentioned:

Otherwise, the G6 is a great phone. 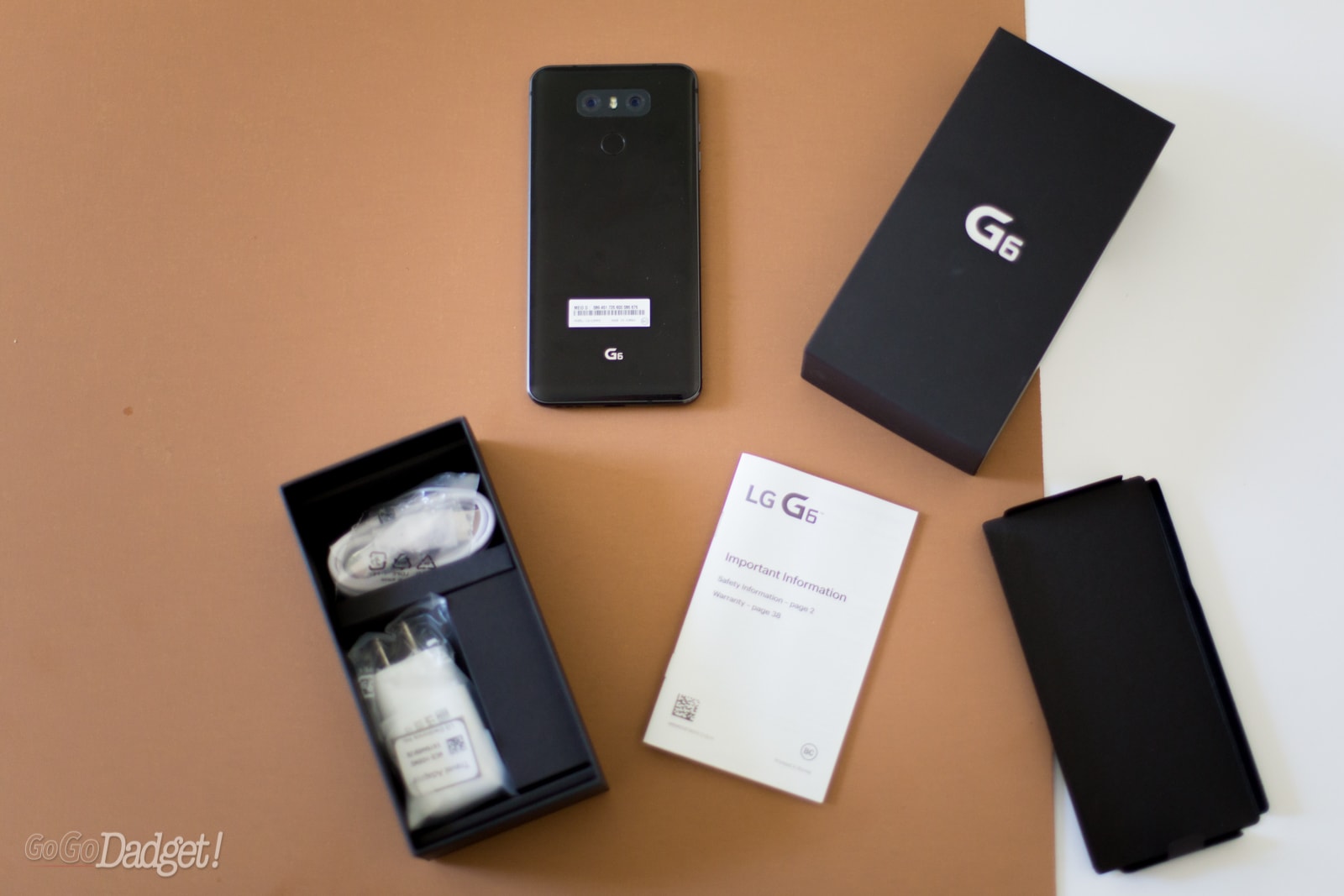 Now, keep in mind that the LG G6 comes with 32gb of storage, which isn’t much. The good news is that you can easily expand it up to 200gb if you want, and you should. You could add a microSD card and still be saving money this route.

All in all, the LG G6 is a great phone that gets a GoGoDadget recommendation. The intermittent lag is worth the hassle for the Dolby HDR, the cool 18:9 screen, and the ruggedness (especially if you have kids). Snag one here, if you’re ready to go bezeless and want nothing to do with Samsung’s TouchWiz at all costs.

[If you missed it, check out our other latest smartphone review: the Moto G5 Plus]