Yeah, GoGoDadget went to CES 2018! I walked a little over 15 miles in 48 hours (which is nothing compared to marathon runners doing essentially double that in a few hours), saw a bunch of cool tech, and had a few qualms about the show.

But this post isn’t about qualms. I’ll save that for another article. This one is about my favorite things at CES 2018.

I’m usually angry at the U.S. Congress for a lot of things, but specifically in the past week or so it’s been that they’ve roadblocked Huawei from entering the U.S. market though one of the largest cell service providers: AT&T.  After Congress lobbied AT&T due to “privacy concerns” just because Huawei is a Chinese company, the AT&T deal died — but it’s not the end. You can still get the Huawei Mate 10 Pro from places like Amazon and Newegg (right now!).

The Mate 10 Pro is flat-out innovative, and I’m thrilled I got a look at it at CES 2018. The Kirin processor has AI built into it to manage apps and help with photography, which can recognize what your camera is pointed at and adjust settings accordingly. It has some of the coolest smart gestures too, mostly used with your knuckles (yep!), and I watched as the phone handled bigger tasks like VR and plug-and-play desktop functionality like a breeze. Turning your phone into a computer using non-proprietary cables and adapters is awesome. 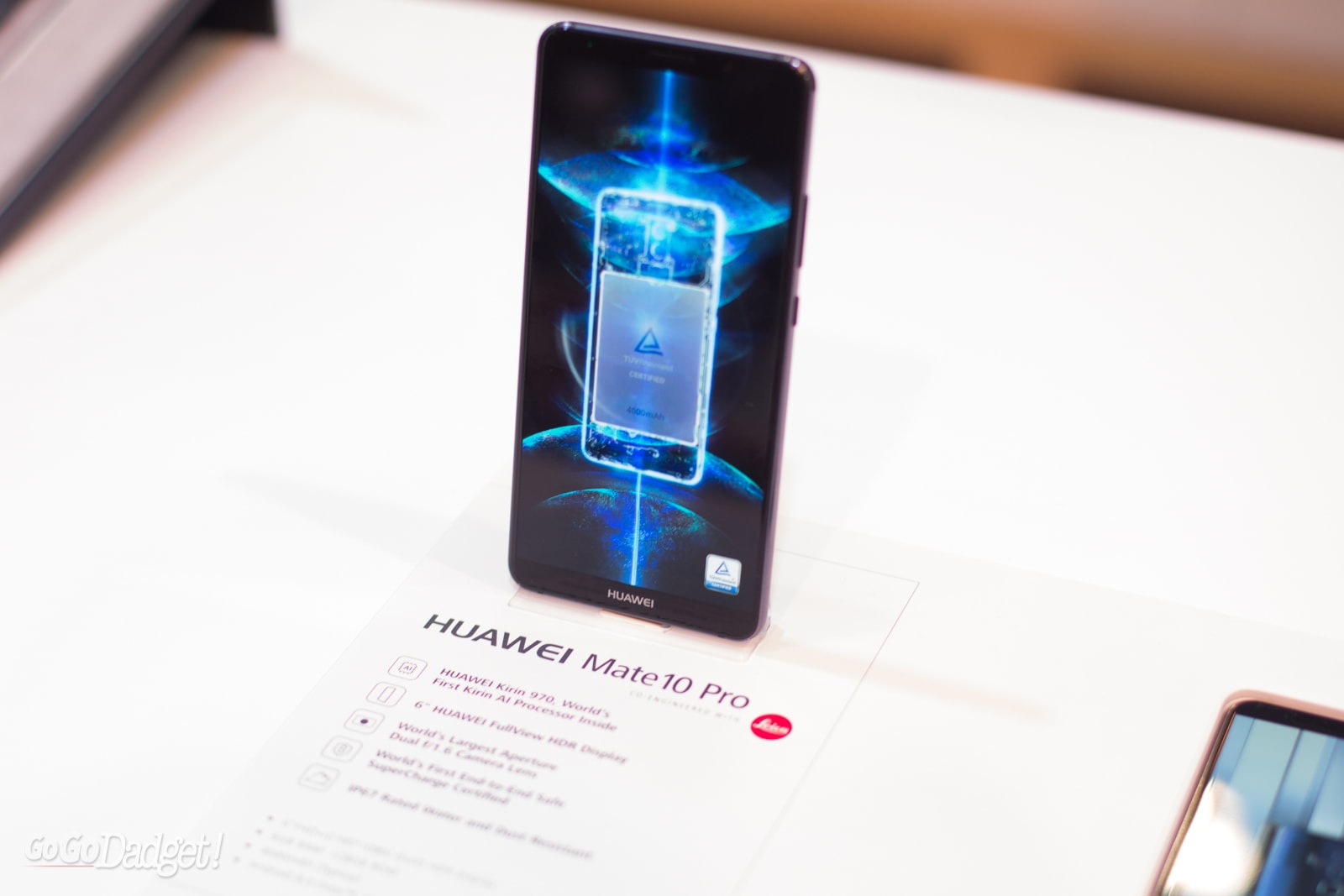 Did I mention it has a huge battery? How about that bezel-less screen? 128gb of storage? What about the price point starting under other flagships? Yeah, Huawei deserves its spot in the American market — and with other countries, like Germany, accepting the maker… well, we just look foolish. As competitive as the mobile market is, adding Huawei’s innovation will only have a positive impact. 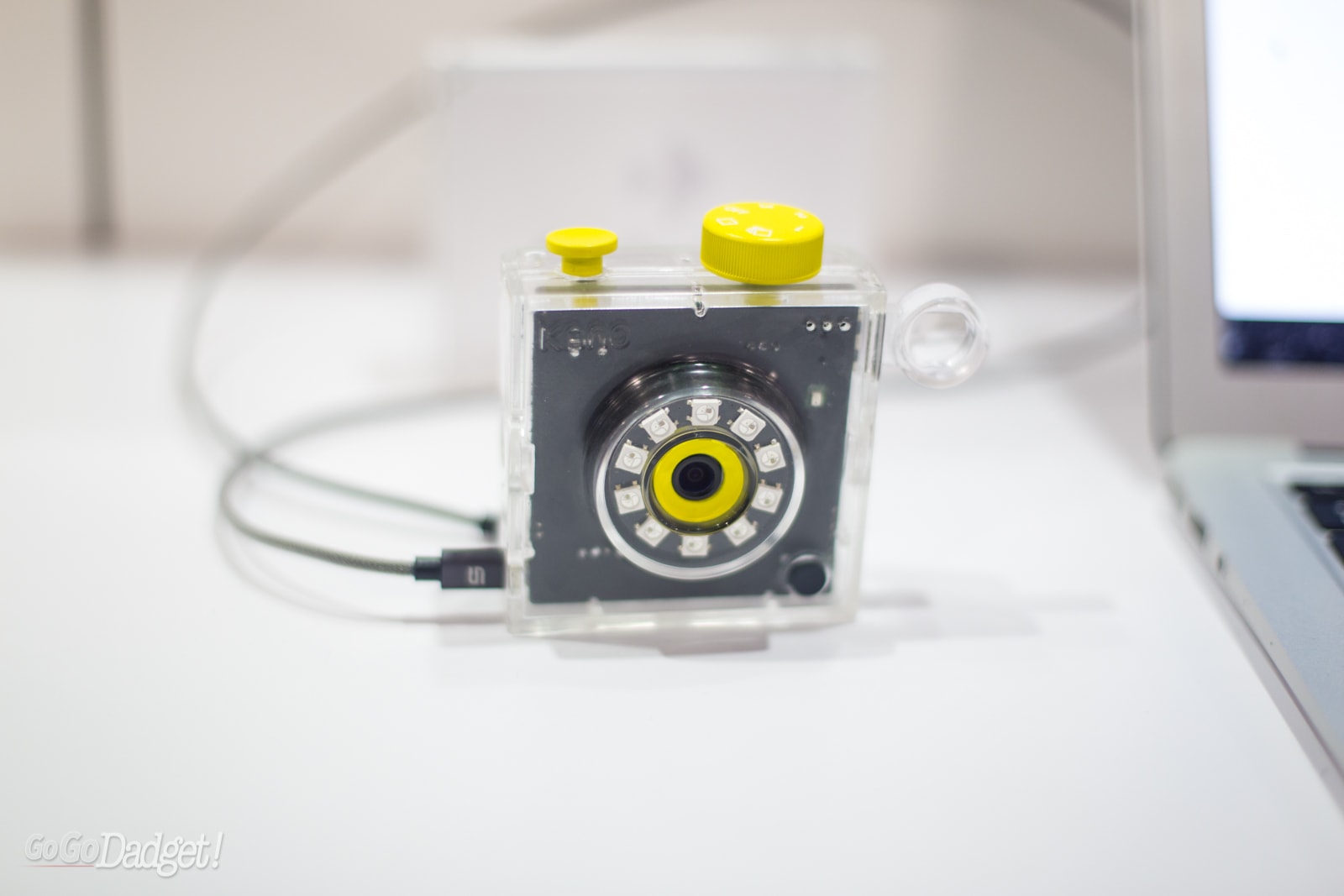 We love Kano around these parts, and it’s no wonder why. I just had to stop by their CES 2018 booth to see what they have in store for the future.

This little camera connects to your computer for charging, downloading, and programming — yep, you and your kids can program your own filters and settings. Then you can detach it and go. Unfortunately it won’t be available for a while yet, probably nearing 2019. 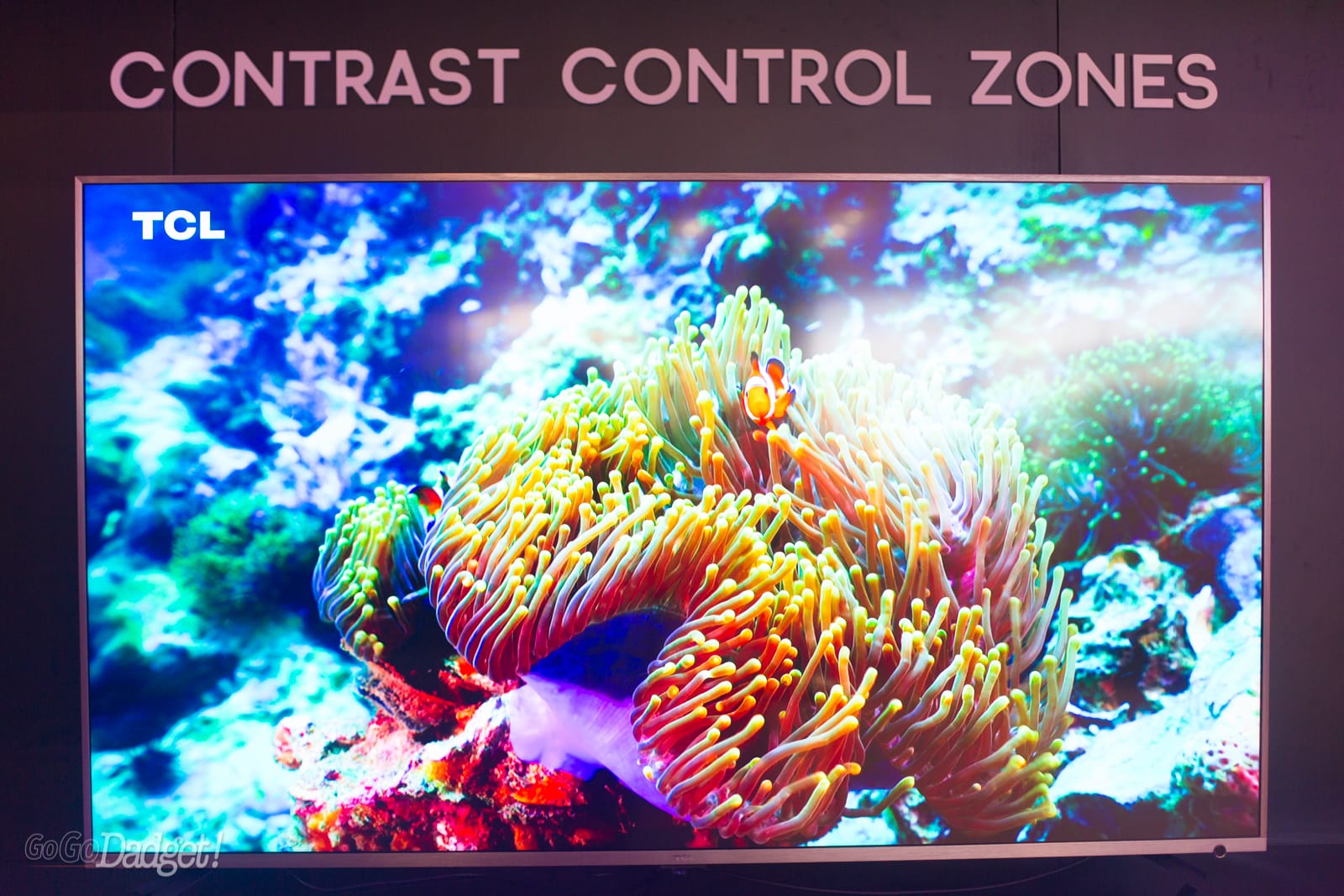 It was called the P Series last year, but that was pretty close to what Vizio was calling their sets, so now it’s the 6  Series. 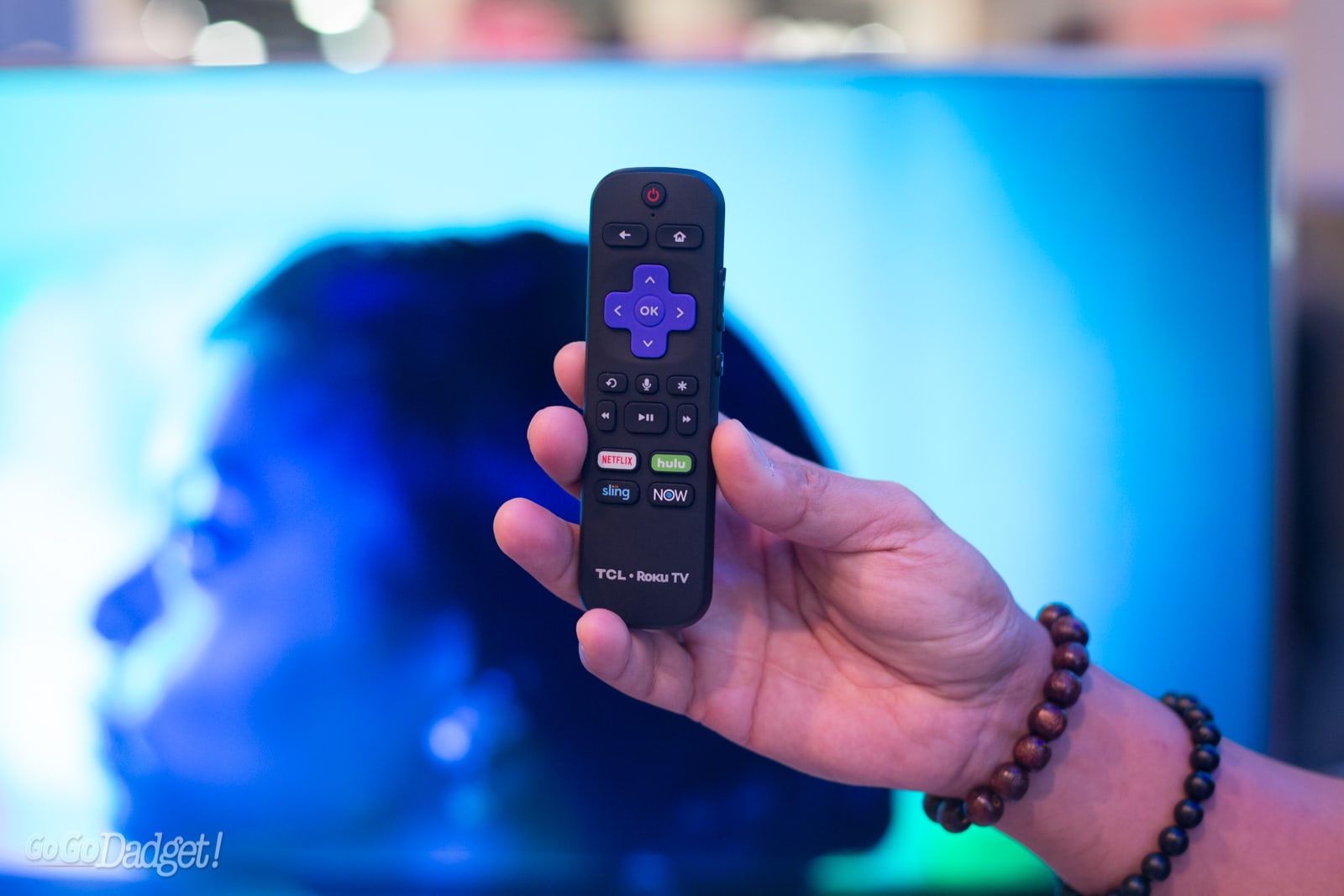 The new 6 Series is going to address two complaints from last year while delivering better guts: it won’t just come in 55in (hello, 65in!), and it will have a nicer matte metal design. Guts-wise, you’re looking at 96 or 120 dimming zones, respectively.  Oh, and you might not even need to calibrate anything out of the box with how the new iPQ Engine handles colors.

Hoping to review one of these guys soon!

BEST TV TECH (That you can’t buy yet, and you’ll need to be rich to buy when you can.): SAMSUNG’S THE WALL

Yeah… so. The Wall is 146in of screen, which can be broken down and re-built into pretty much any shape due to the modular panels. It’s crazy to look at, and even crazier to think about, and probably craziest to your wallet, even if it’s meant for businesses. It’s as if there were no seams!

LG’s 8K TV and rollable TV would have been on this CES 2018 list (probably) if they didn’t hide them away for private tours only, which is about as bogus as it gets. That’s what everyone wants to see, LG. 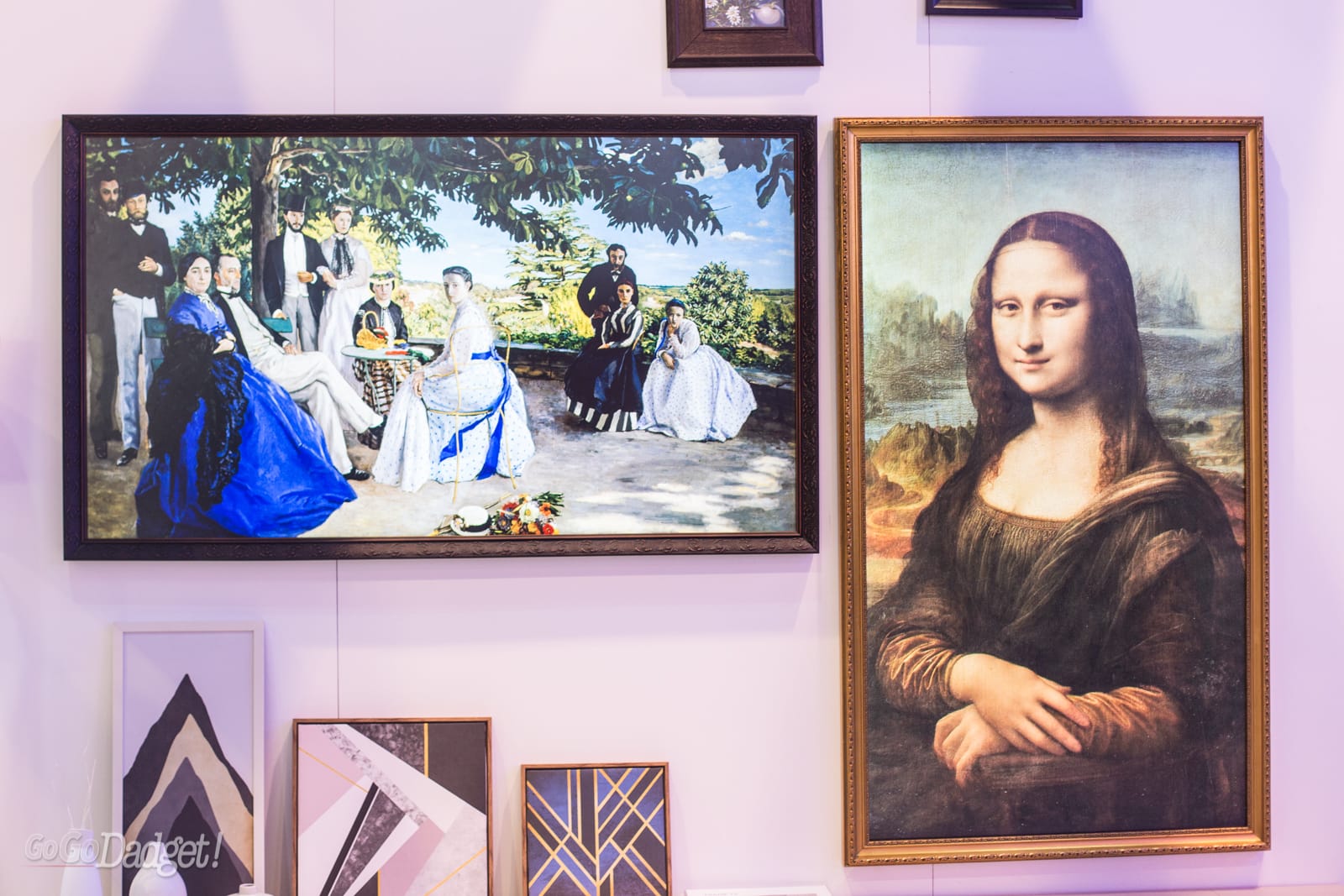 Yeah, Samsung already has “The Frame,” but I prefer the look of TCL’s probably much cheaper response. I had to get a few inches away from the screen to even tell the brush strokes weren’t real. Insanity: 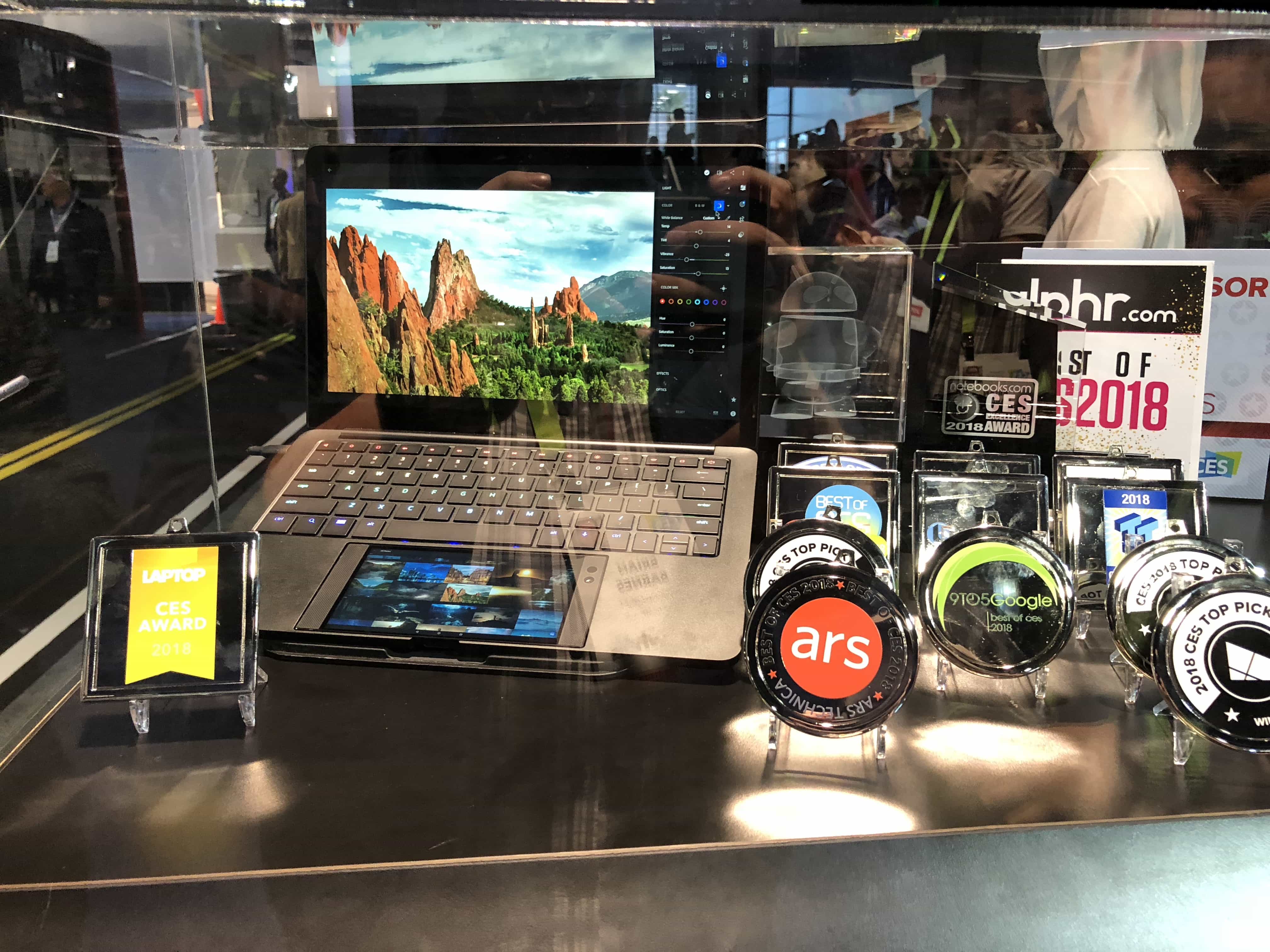 I got to play around with using the Razer Phone as a laptop. Razer’s Project Linda is a laptop shell that you put your Razer phone in, the USB-C inserts into the phone like a robot probe, and then you have a desktop experience using the phone as a trackpad.

It was awesome. As a dad, portability is key — being able to use something like this on the go would be invaluable. We just need to get our hands on a Razer phone for review here at GoGoDadget before we get ahead of ourselves. 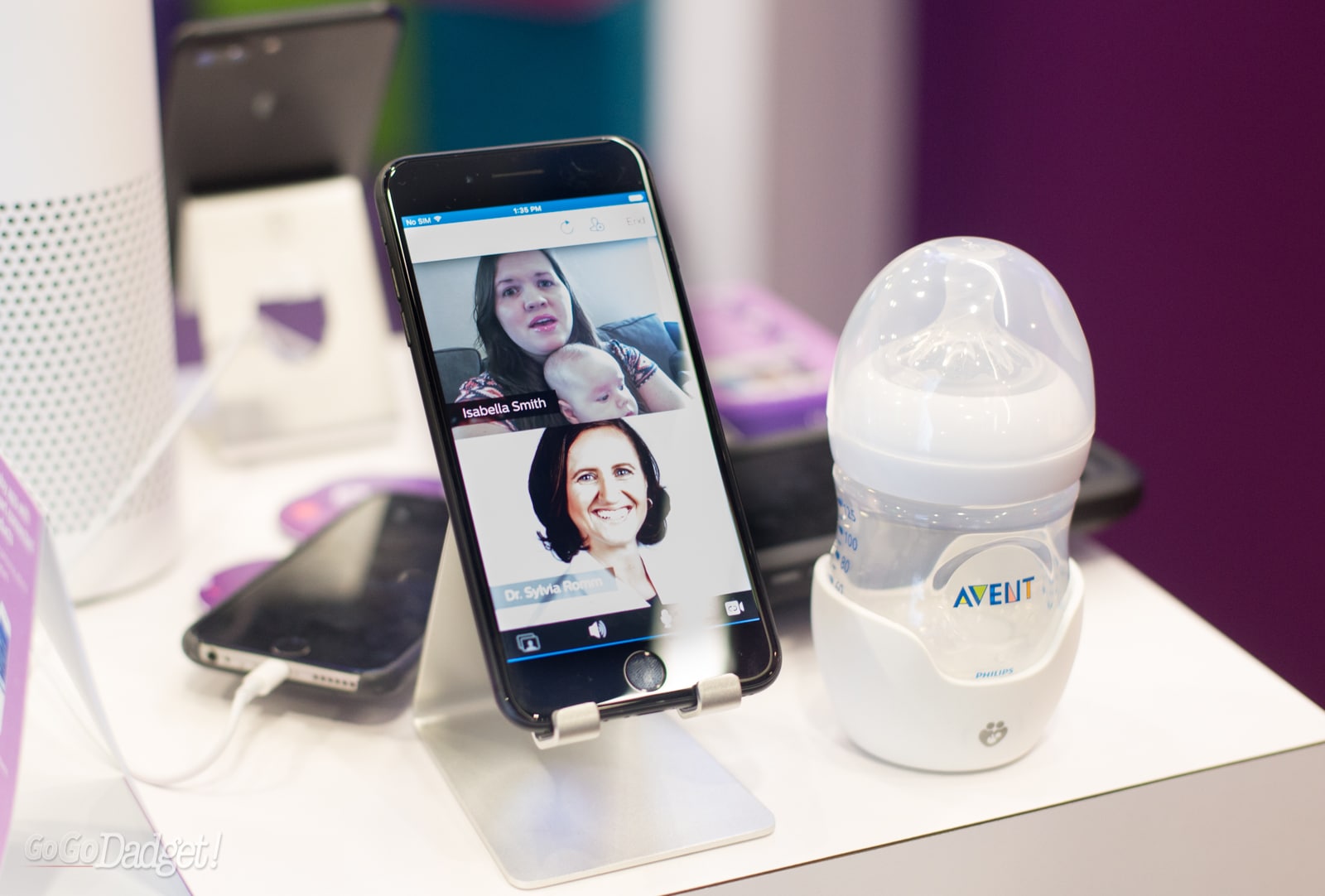 As a parent, especially a new parent, there’s nothing worse than something going wrong or something not being right after hours. If it’s really bad, the Emergency Room is the best option, but if you’re just not sure about something and it’s not a true emergency, Philip’s UGrow app is about to become really handy — essentially, you’ll be able to FaceTime with actual doctors and lactation experts anytime as Philip’s has partnered with American Well. The cost of these consultations will range, but from what I saw it was in the affordable $15 range for a quick chat to help out.

The UGrow app will also help track everything you want with your child’s development, and even export the data in easy charts for your next in-person Doctor’s visit.

I saw a fridge that can bring up recipes based on what you have in the fridge, and also preheat your oven for you. Which is cool, but I don’t have a vault full of diamonds somewhere to pay for it.

The photos I got of the ThinQ Smart Fridge did not make it, so just imagine a future fridge with a  29in transparent touch screen on it and you get the gist. 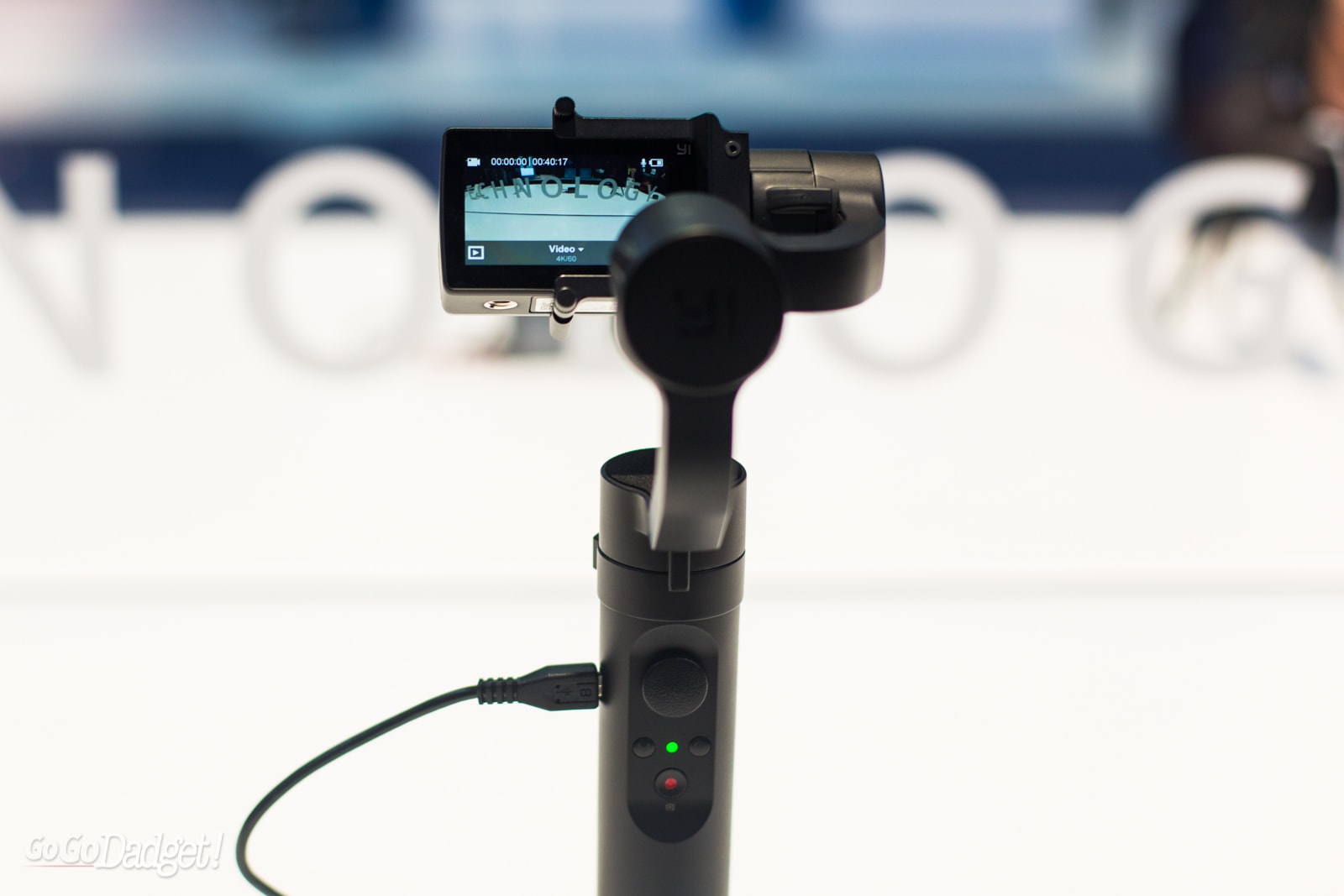 Yi makes the best, affordable, 4K 60FPS action cam, hands down. The 4K+ can’t get much better — until you put it in Yi’s Gimbal and the stabilization becomes otherworldly.

And it wouldn’t be Yi, either, without the Gimbal being both high quality and affordable. So glad Yi was my final stop at CES 2018. 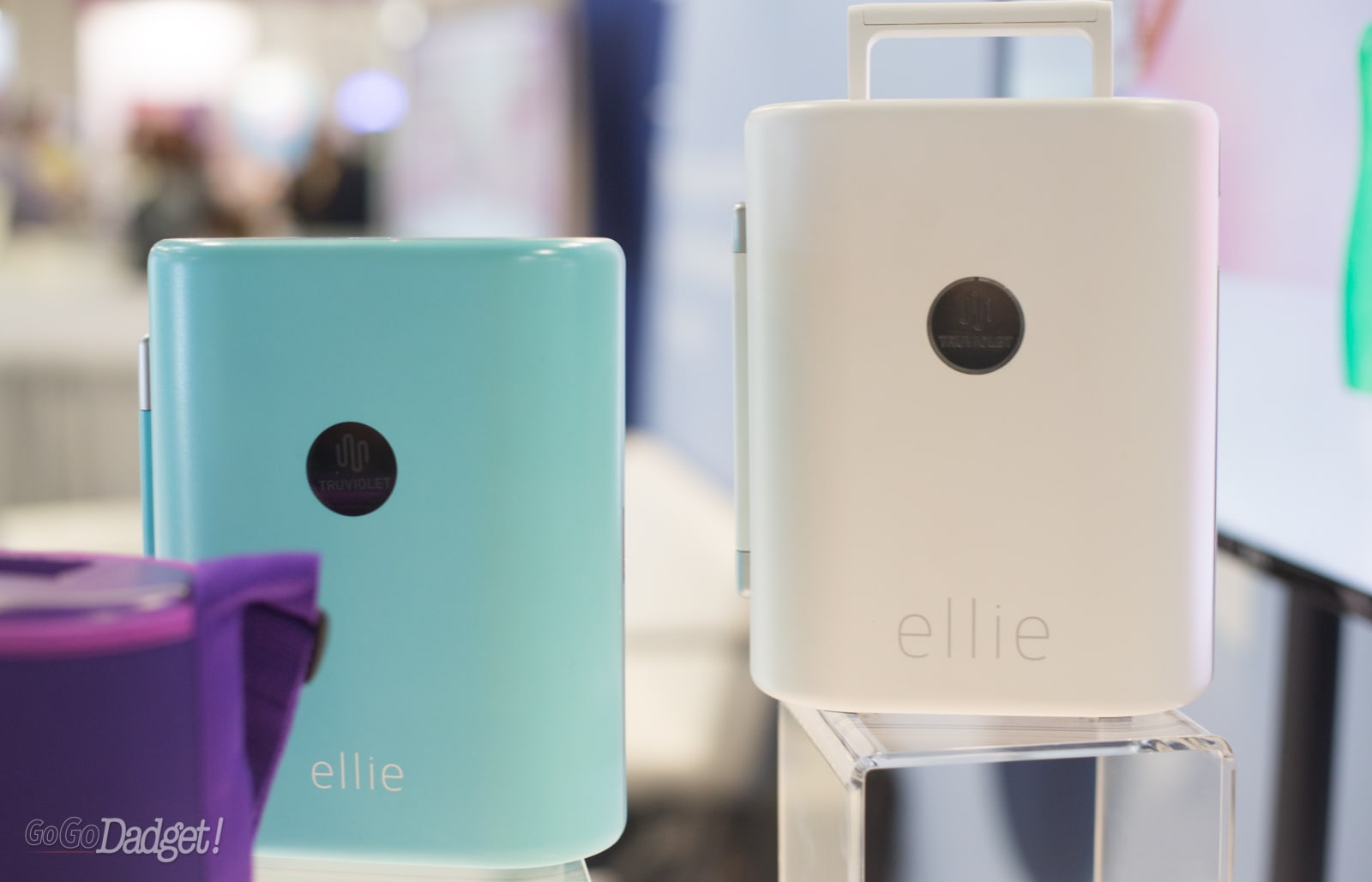 Here’s an interesting CES 2018 gadget: a travel companion meant for sterilizing baby bottles with UV light. The thing is, though — it’s not just for bottles. You can use it on anything that’ll fit within reason. Like phones and toothbrushes. Plus it has a rechargeable battery. 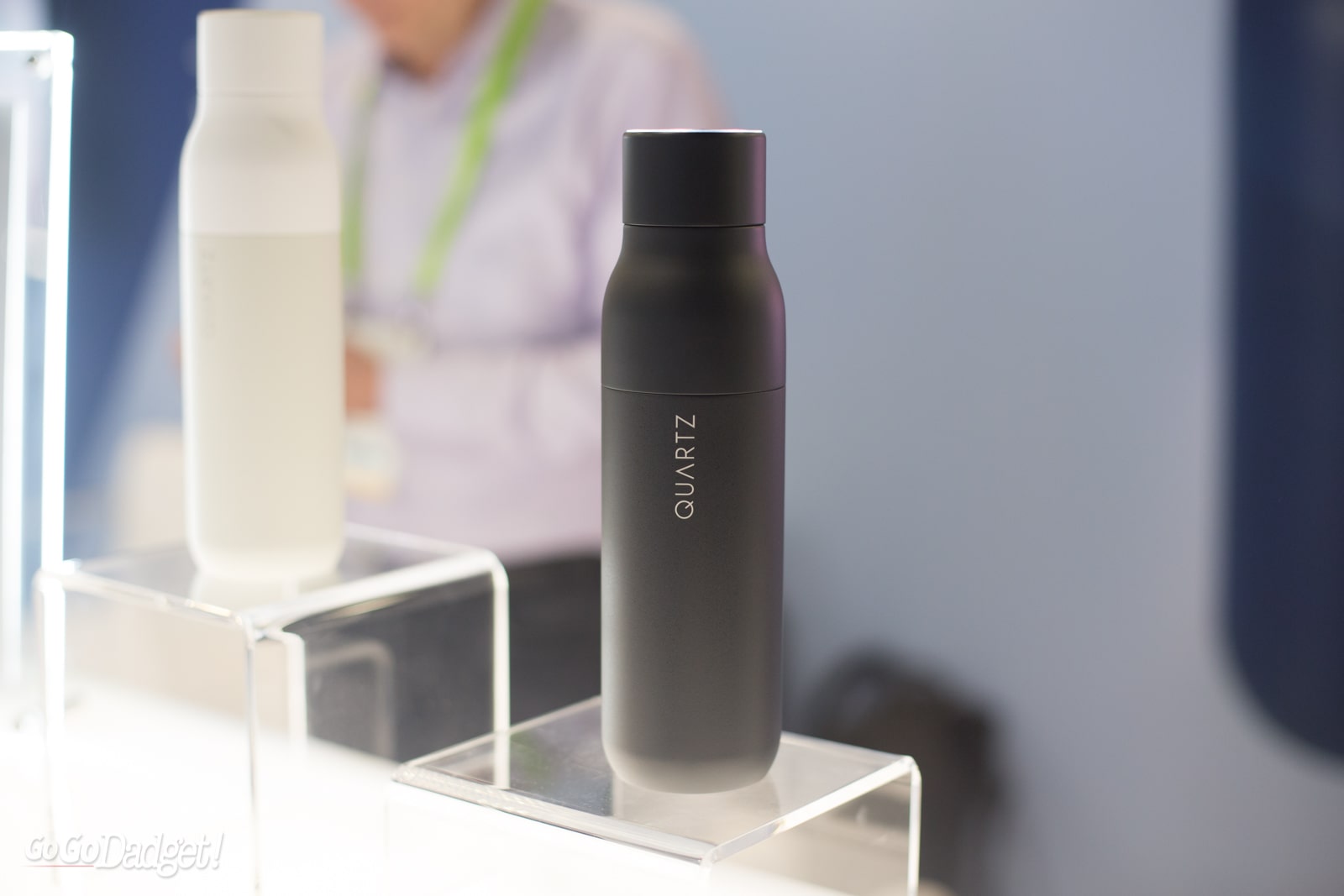 Look at this nonsense. So cool.