TL;DR: The Yi 4K+ Action Camera undercuts on price without losing any quality at all, once you get the hang of some confusing menus. 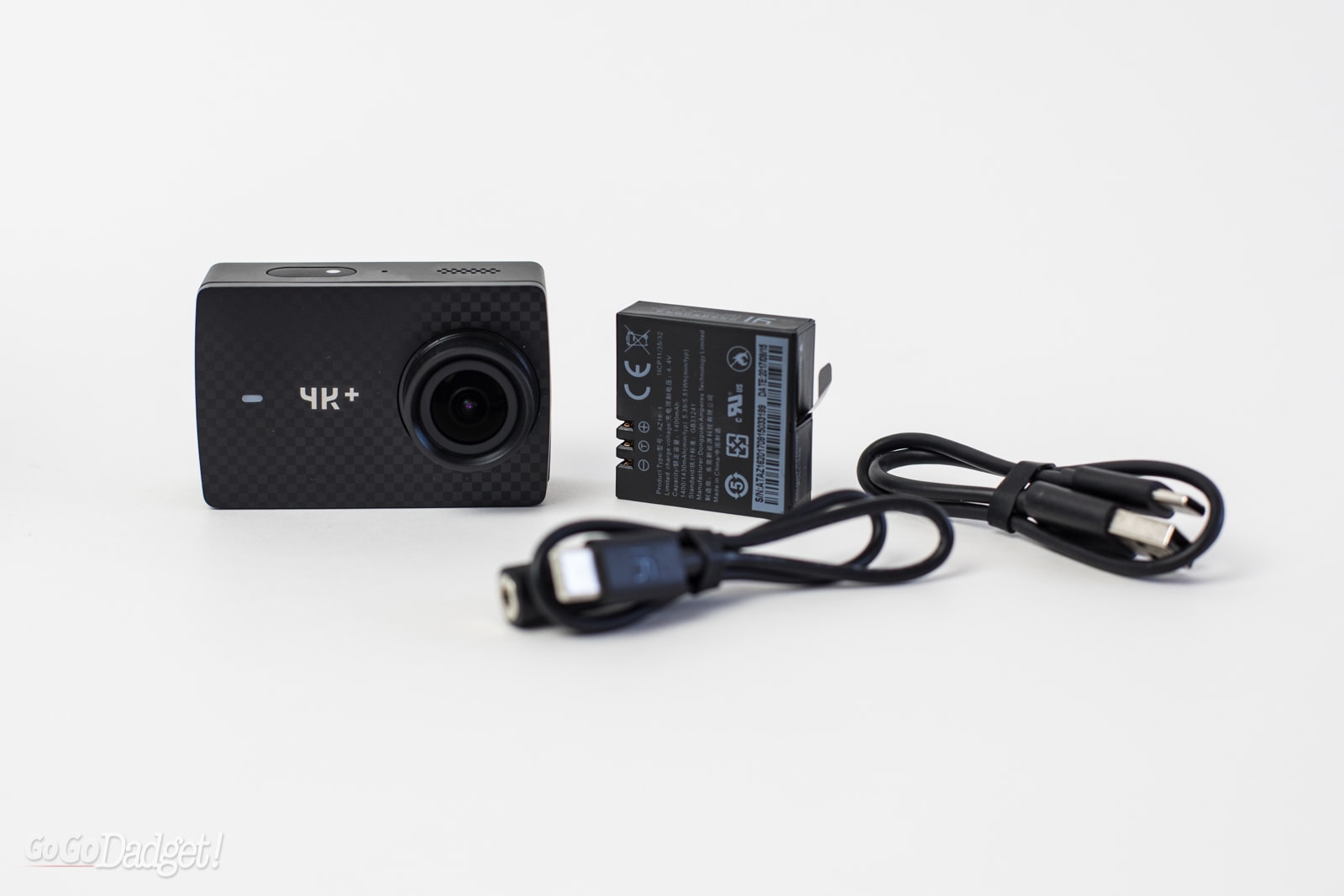 Okay, time for the full disclosure: Yi sent GoGoDadget both their 4K+ Action Cam and Action Gimbal for free, in exchange for our open and honest reviews, and for testing throughout the year in situations that nobody could rightly fit into a normal review period. They’ve trusted us to really put the gear to use as not just consumers, but parents as well. We’re not expert filmmakers, so you’re going to see the products used and tested in ways every normal person (who doesn’t do insane snowboarding or surfing tricks) would. None of what follows has had any outside influence on it what-so-ever.

Yi is an interesting company that’s making big waves as their largest competitor, GoPro, continues to struggle. Why is Yi so interesting? They’re not only selling products at insane price points while not compromising on quality, but they’re innovating before anyone else gets the chance — they hit the market with a 4K 60FPS action camera almost a full year before anyone else.

I have kids. You might have kids too. If you do,  then you know that when you’re buying technology it almost always has to have a positive impact on being a parent. When it comes to phones, that means durability, reliability, and nice pictures — because all you do is photograph your kids. You do it for memories, for distant family members, and for sweet, sweet likes on Instagram.

When it comes to the Yi 4K+ Action Camera, a few things mattered to me: do the videos look nice, is it easy to use, and is it durable. Well, it hasn’t broken yet, the videos look incredibly nice, and despite some menu confusion it’s actually pretty easy to use. 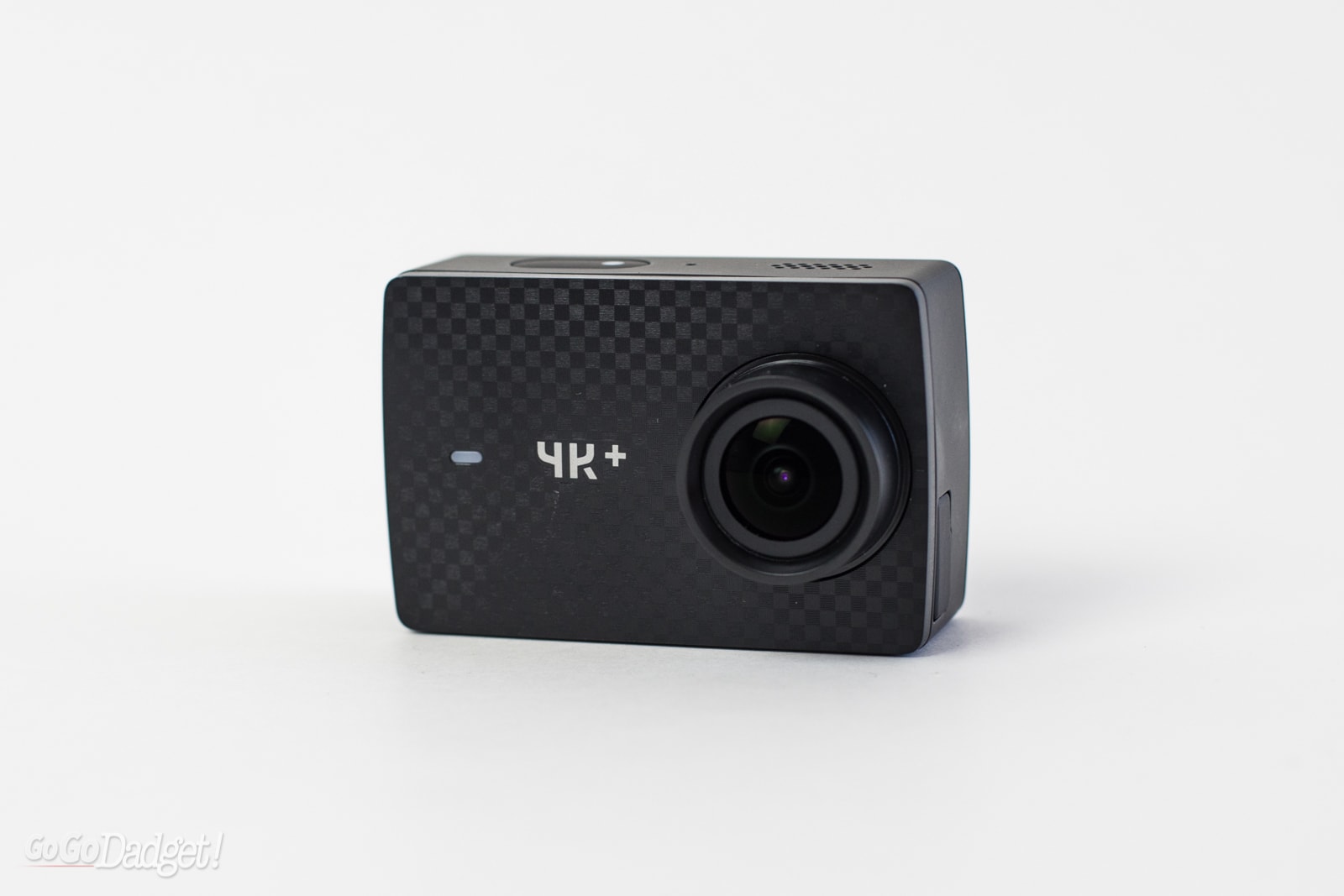 Looking at the Yi 4K+ Action Cam, it’s immediately recognizable as an action cam. Despite there being quite a few action cameras out there, I’m pretty sure everyone is going to accidentally call it a GoPro at first glance just like how people call most tablets iPads. It’s a shame, but unavoidable.

The little tweaks to set it apart, though, are really great: the carbon-fiber-esque pattern on the front is sharp and adds a lot of texture, and the touch screen on the back is responsive and clear. On the side of the camera you have the USB-C (YESSSS!!) port for charging, data transfer, and microphone audio, and on the bottom you have a panel that swings open for the battery and MicroSD card, and a screw-location for a tripod. On the front is a status LED, the lens, and the logo. On top is the mic, power/shutter button, with a built-in status LED. 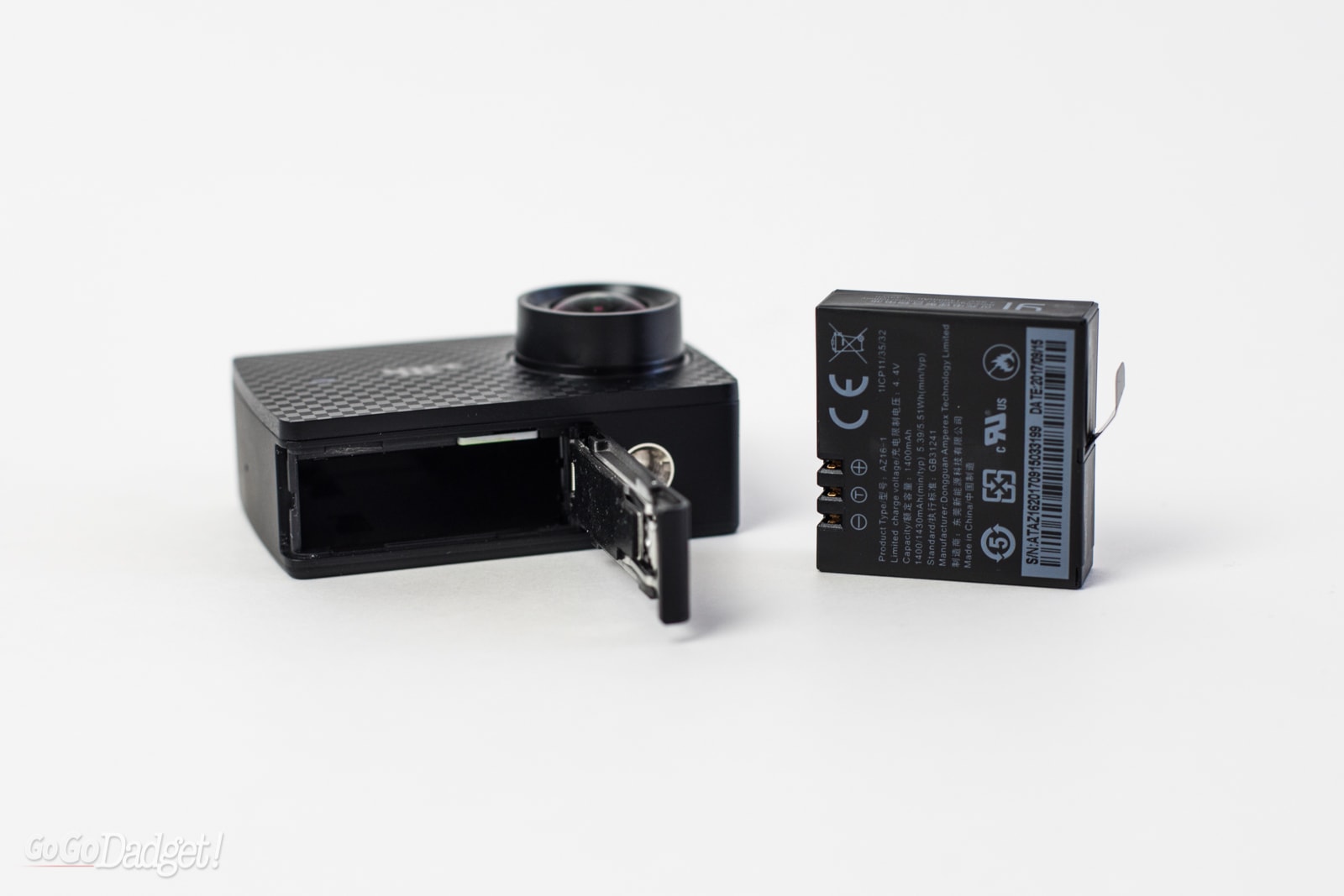 It’s simple, minimalist, and just works. There’s no fumbling around with what does what, because each thing has a simple job. We love how versatile USB-C is, because now you don’t have a handful of ports for different tasks. It’s just one multi-tool port for everything.

It also has more heft to it than you expect, and feels extremely solid. It isn’t built out of flimsy materials, and that’s a key point because it’s cheaper than other action camera options. 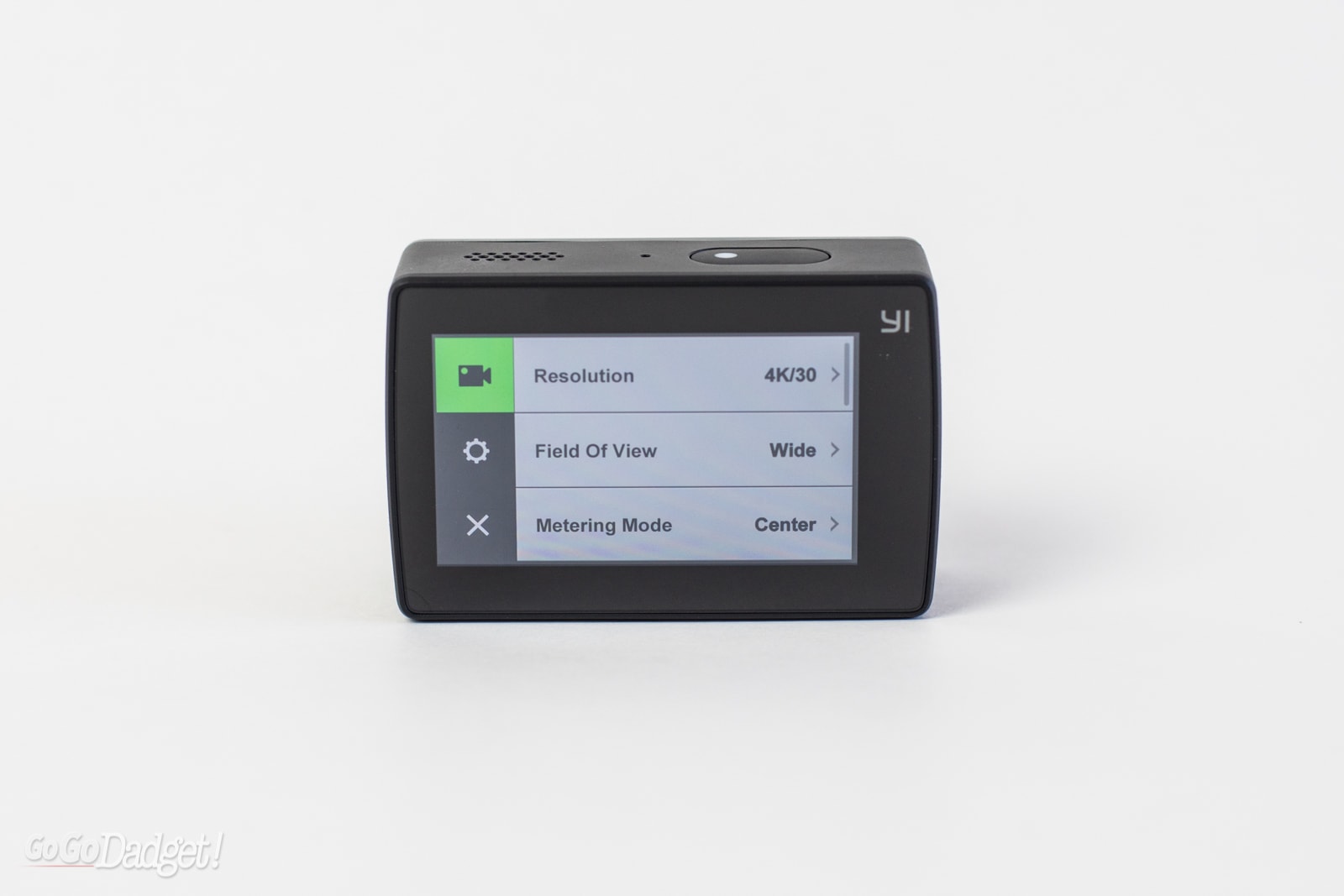 Powering up the 4K+ Action Cam is easy and fast.

On first boot it walks you through some of the menus and then sets you on your way. Some of the quick menu options are nice, like changing the mode at the bottom without having to dive into a bunch of menus, and pulling down from the top give you fast access to wifi, voice commands, and other options — though I’m not really sure what that icon in the center is supposed to be (below), but it’s for bluetooth. 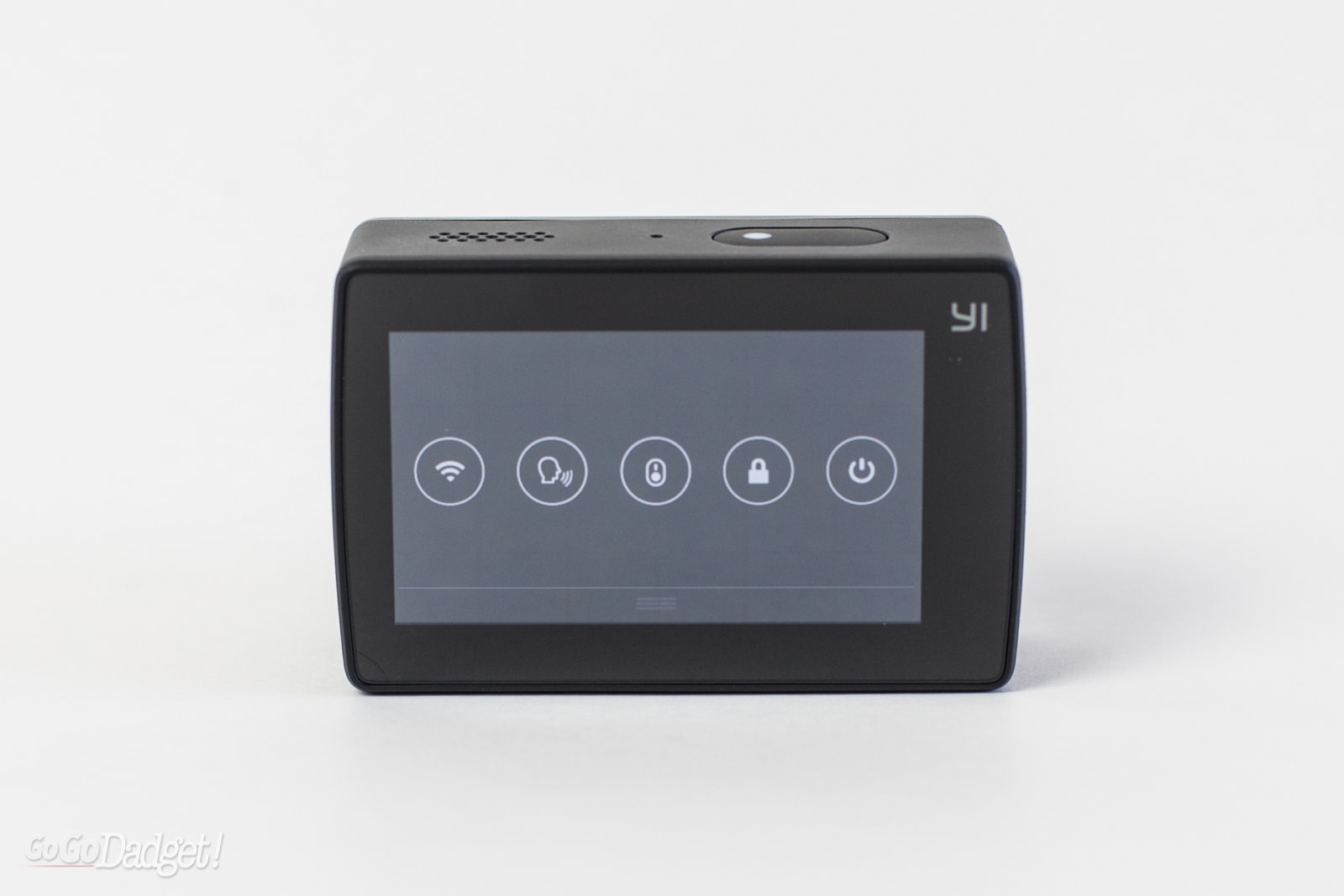 Honestly once you’ve got your settings in place, it’s as easy as hitting the button on top of the camera and pointing it at the thing you want to capture.

My biggest gripe with the device is the settings menu, as it’s so simplified that it doesn’t give enough context for options. For example, I can see the resolution selections, but there are literally 3 different options for 4K: 4K HD, 4K, and 4K Ultra . I see the differences in resolution, but the difference between all of them isn’t very apparent, and you’ll need to do a little educating to make sure you’re using the right one for your needs:

It also took me a while to find resolution options that allowed me to change the lens angle to anything but WIDE, because I’m not really fan of wide angles in general. Not everything needs to look like a sporting video, or skateboarding trick clip.

Once you figure it out, though, and get the hang of what resolution works best for your needs, you can pretty much to set it and forget about it. 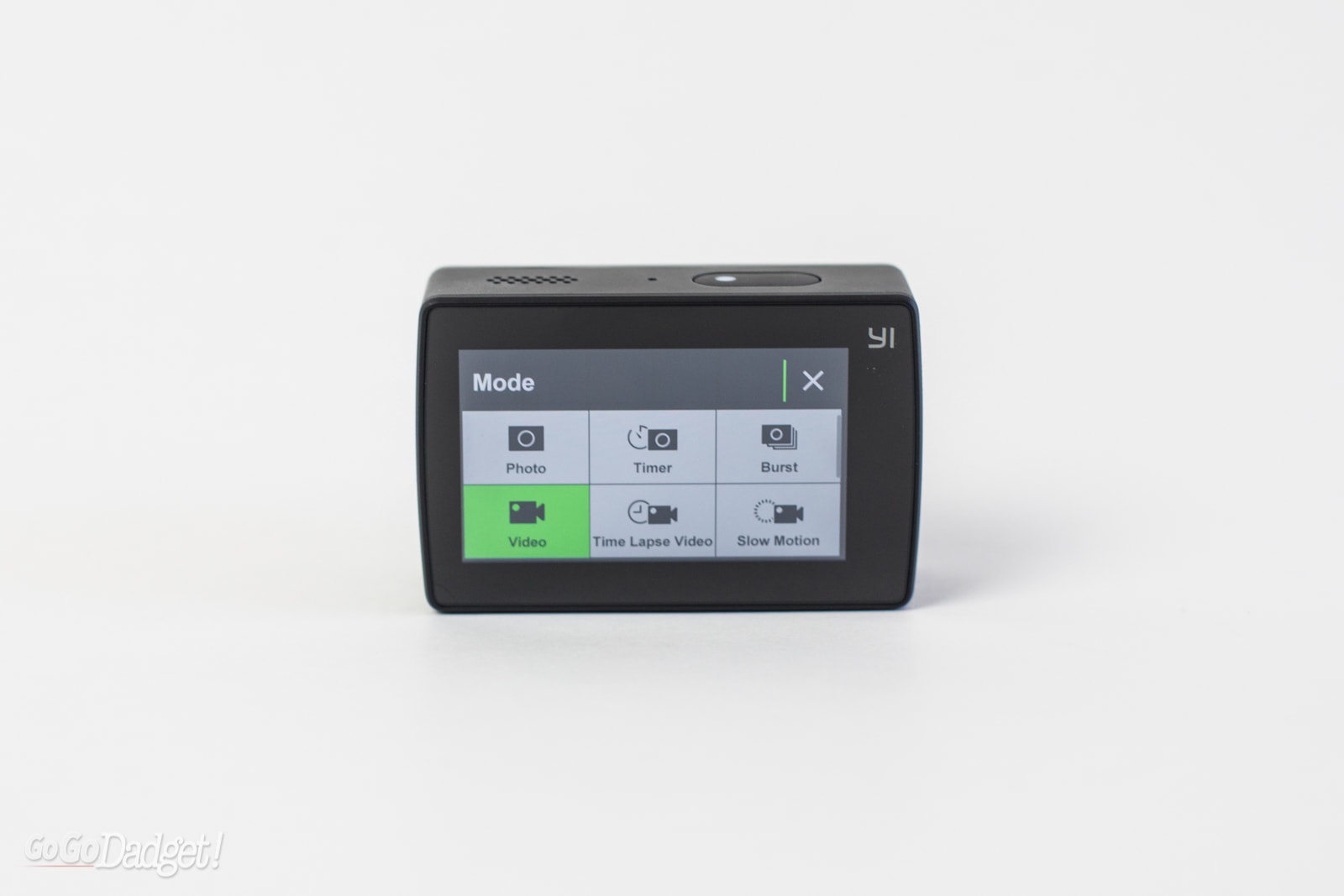 The Yi 4K+ really shines when it comes to quality, and that’s why it’s such an exciting device. Nothing at this price point has any business being this great. Check out the first video I made with it, using the Action Gimbal (review coming soon), at 4K 60fps:

Smooth, clear, crisp. All things you want from a home video.

As a general rule, I’m not a huge fan for 60fps video for anything other than sports, just because I think 30fps gives more of a cinematic feel. Here’s a short clip at 30fps, and you can compare it to the last video:

This second video was shot at 2.7K resolution at 30fps because it gave me the option for the medium lens, and then it was exported at 1080p 30fps and uploaded to YouTube!

We’re also working on a time lapse video that isn’t quite done yet, but we will update this post when it is — just keep an eye out for it on social media too! 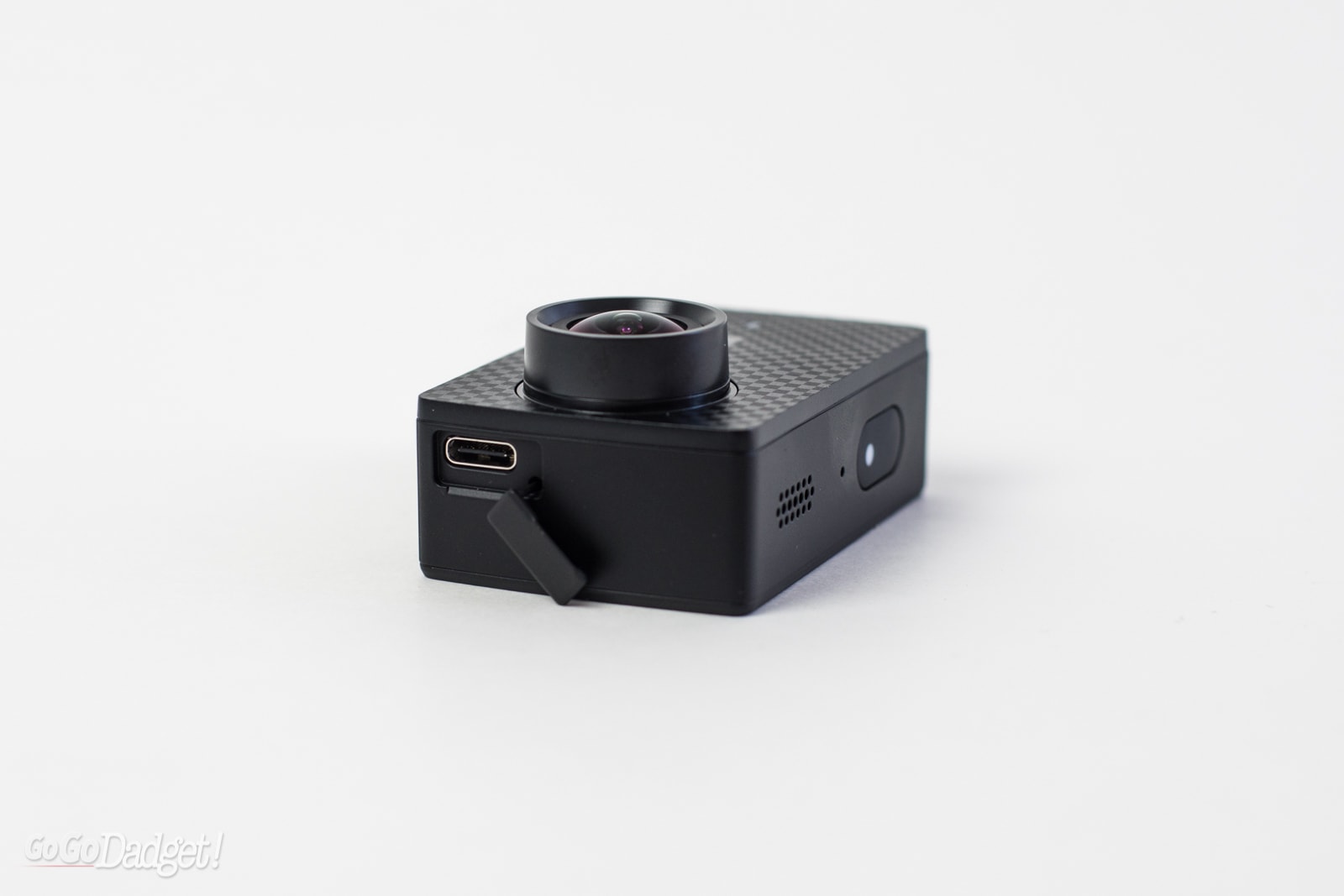 You can also take still pictures with the Yi 4K+, though it’s better at video. It will do in a pinch, you know, just in case you’re stuck in the wilderness somewhere, but really, just use your phone at this point. 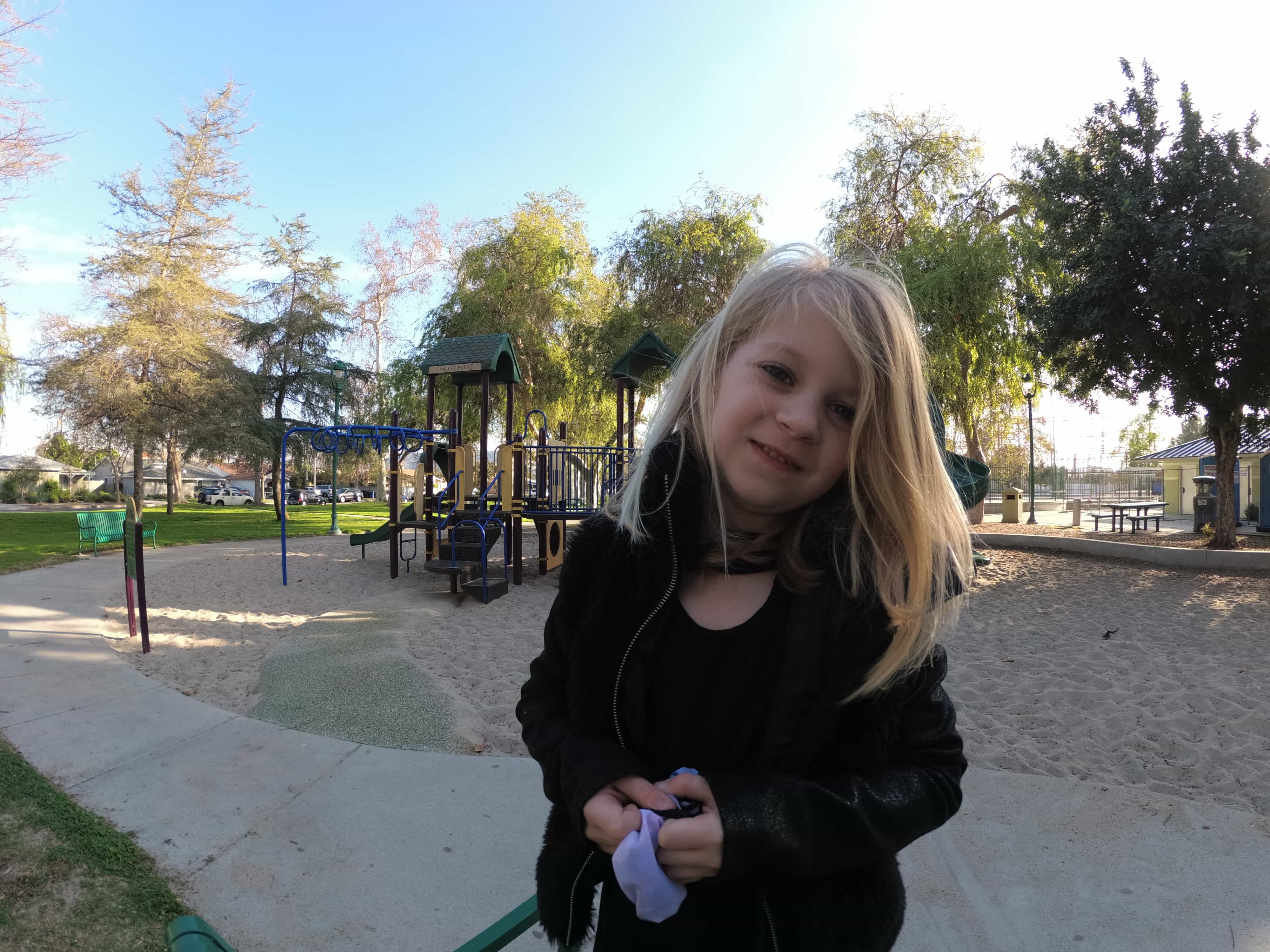 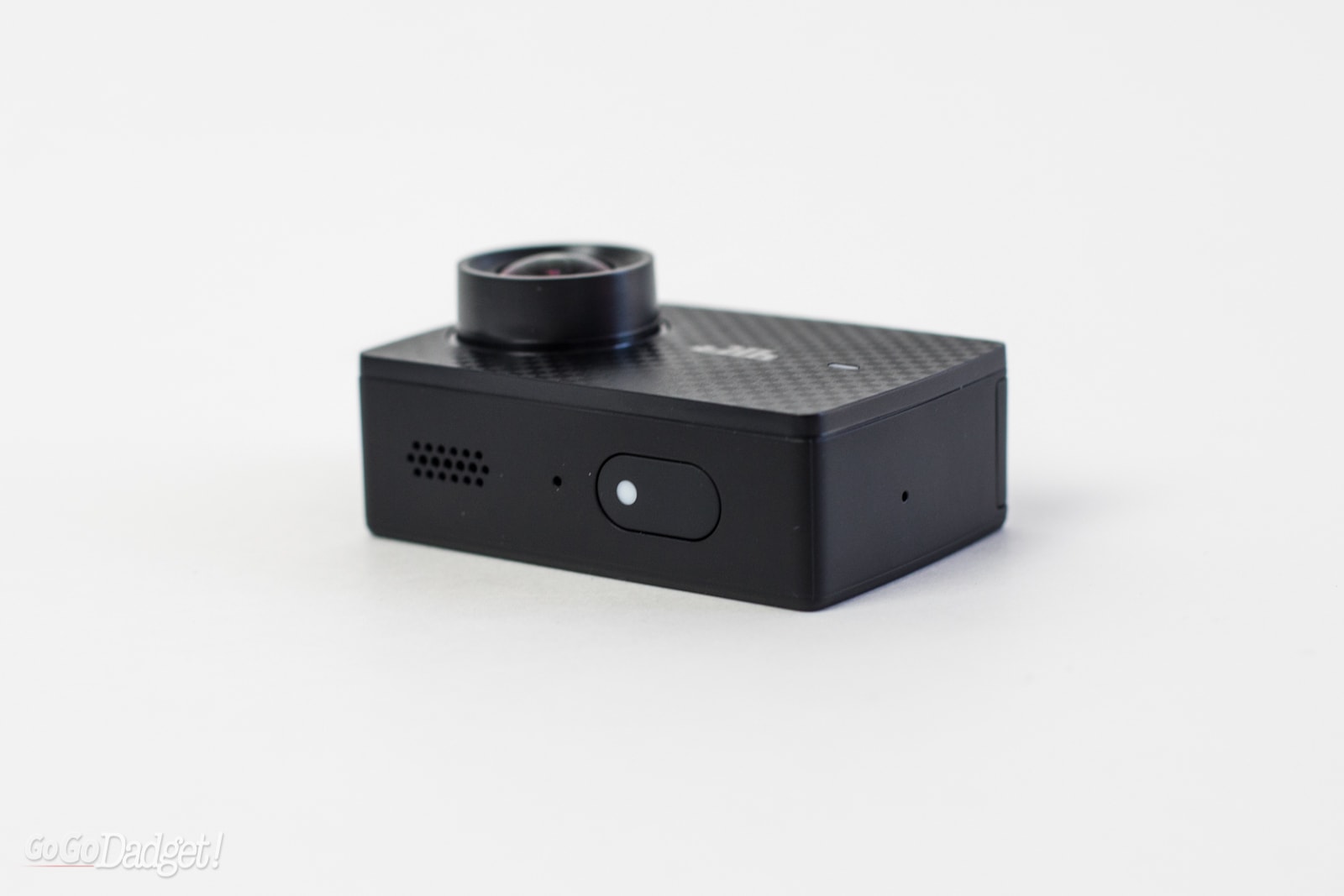 Audio quality is fine in most environments, I’m happy to report, but it sounds like an action camera. If you’re going to be shooting something like… I don’t know, a short film, you’ll want to have an external mic. For home videos though, it gets the job done.

You can hear the audio quality in the YouTube video embedded above, and yes, it does capture the sound of the internal workings of the gimbal. More on that in the Action Gimbal review.

At 4K 30fps, the battery lasted right below an hour and a half. With a 1400mAh battery, that’s pretty great! The lower the resolution too, the longer the battery will last. Since most people don’t really need to be shooting in 4K all the time until 4K TVs and monitors are more commonplace (and that time is coming!), you might as well stick to 1080p (or 2.7K for a bit of future proofing).

Your kid’s birthday party doesn’t need to be in 4K quite yet, but the option for it to be is amazing. 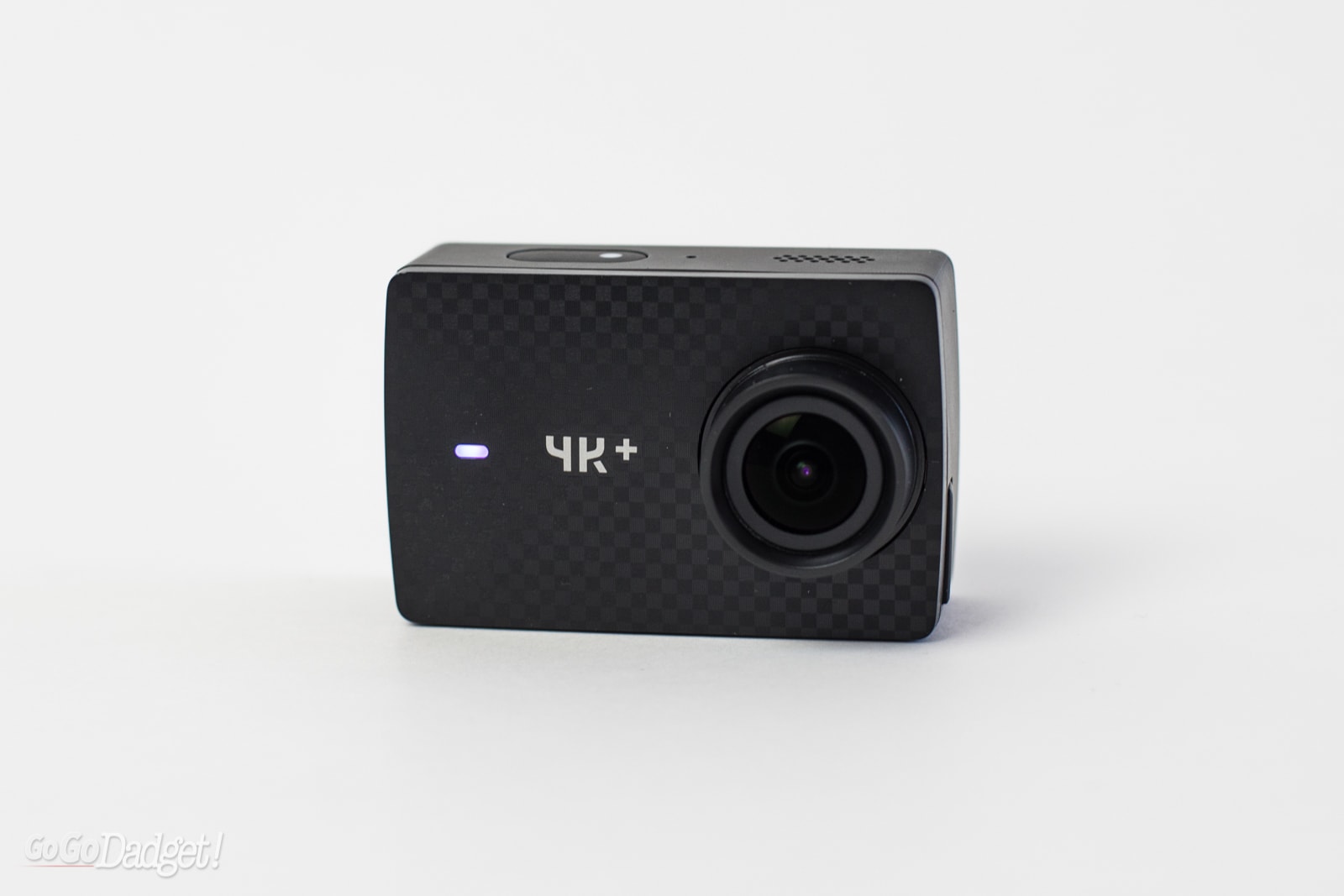 At this price point, the Yi 4K+ is not hard to recommend. Despite the fact that our review unit was provided for free, it sits firmly in my family’s budget, and we’re pretty normal, so if you have an adventurous family and want a dedicated video camera that isn’t your phone — this is your best bet.

It’s simple, affordable, and spits out high quality videos. Mix it with the gimbal and your home movies will be on a whole different level.

If you’re interested in the new Action Gimbal we used for both sample videos, you can snag one of those right here — and stay tuned for our review of it.