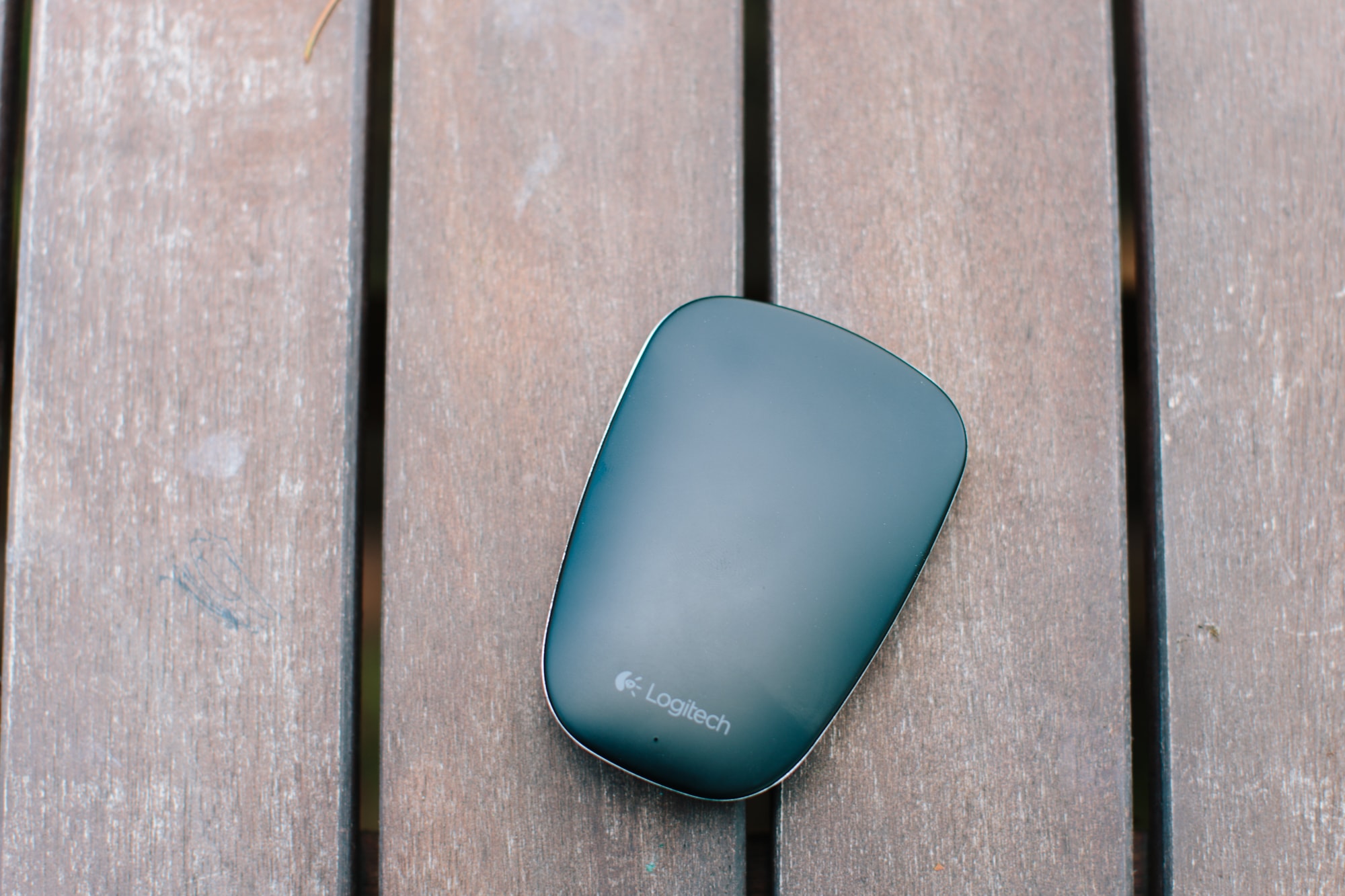 Full disclosure: my everyday machine is a MacBook Pro from 2015. One of the 13 inch versions, middle-of-the-road specs, and it gets the job done. I’m mostly using it to browse and write, and sometimes my wife uses it to work on photo editing in Photoshop when she would prefer to work from the couch than her desk.

I bought it for portability and was using it as my workhorse while Managing Editing a few jobs ago, but then I started working more from home and the small screen just wasn’t doing it at my desk. So I bought a bigger monitor, a wireless solar keyboard, and the Logitech Ultrathin Touch Mouse. It’s much more comfortable this way, instead of being hunched over a small laptop, and all of it works perfectly with my MacBook Pro.

I didn’t want to spend a stupid amount of money on any of these peripherals, because I’m a dad and that’s irresponsible. Specifically, I wanted non-Apple versions of each thing because it would be cheaper, but I wanted the same functionality.

Here’s the first of those three reviews: the Logitech Ultrathin Touch Mouse T630. 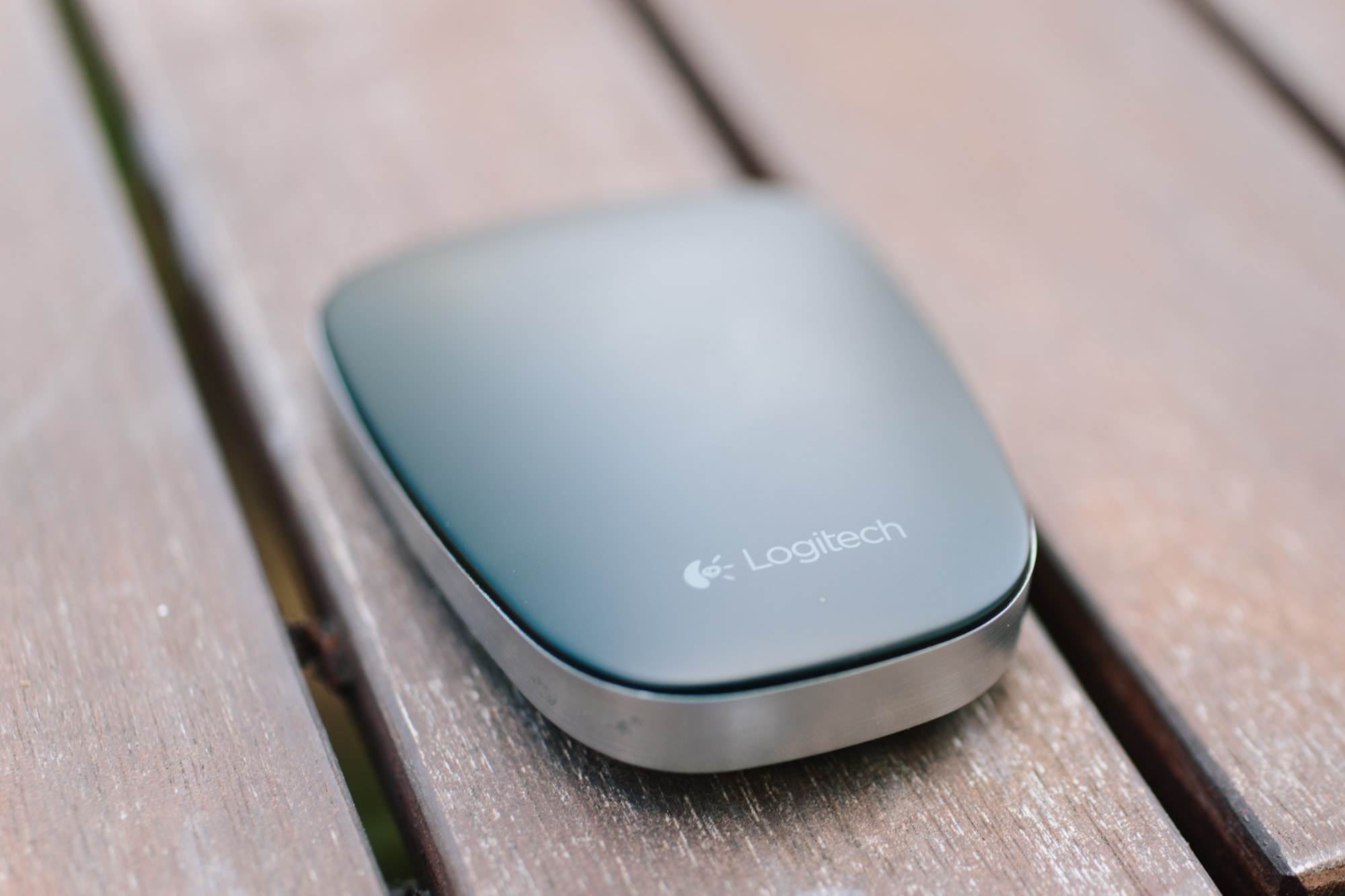 When it comes to a mouse, I really couldn’t care much about how it looks as long as it works and is convenient, and it makes use of Apple’s touch gestures built into MacOS. The Logitech Ultrathin Touch Mouse T630 was actually built for Windows, but is compatible and works with all of the touch gestures I want to use with my MacBook Pro.

Plus it’s half the cost, but we’ll get to that later.

Design-wise, it certainly looks cool with sleek black and silver surfaces, a simple wedge design, and portability. It works on bluetooth, so I can keep a USB port free on my MacBook. On the bottom is the power switch, the bluetooth profile switch (it supports two different devices), and the micro-USB charging port (it came with the tiniest USB cable ever, the micro-end at an unusual right angle). 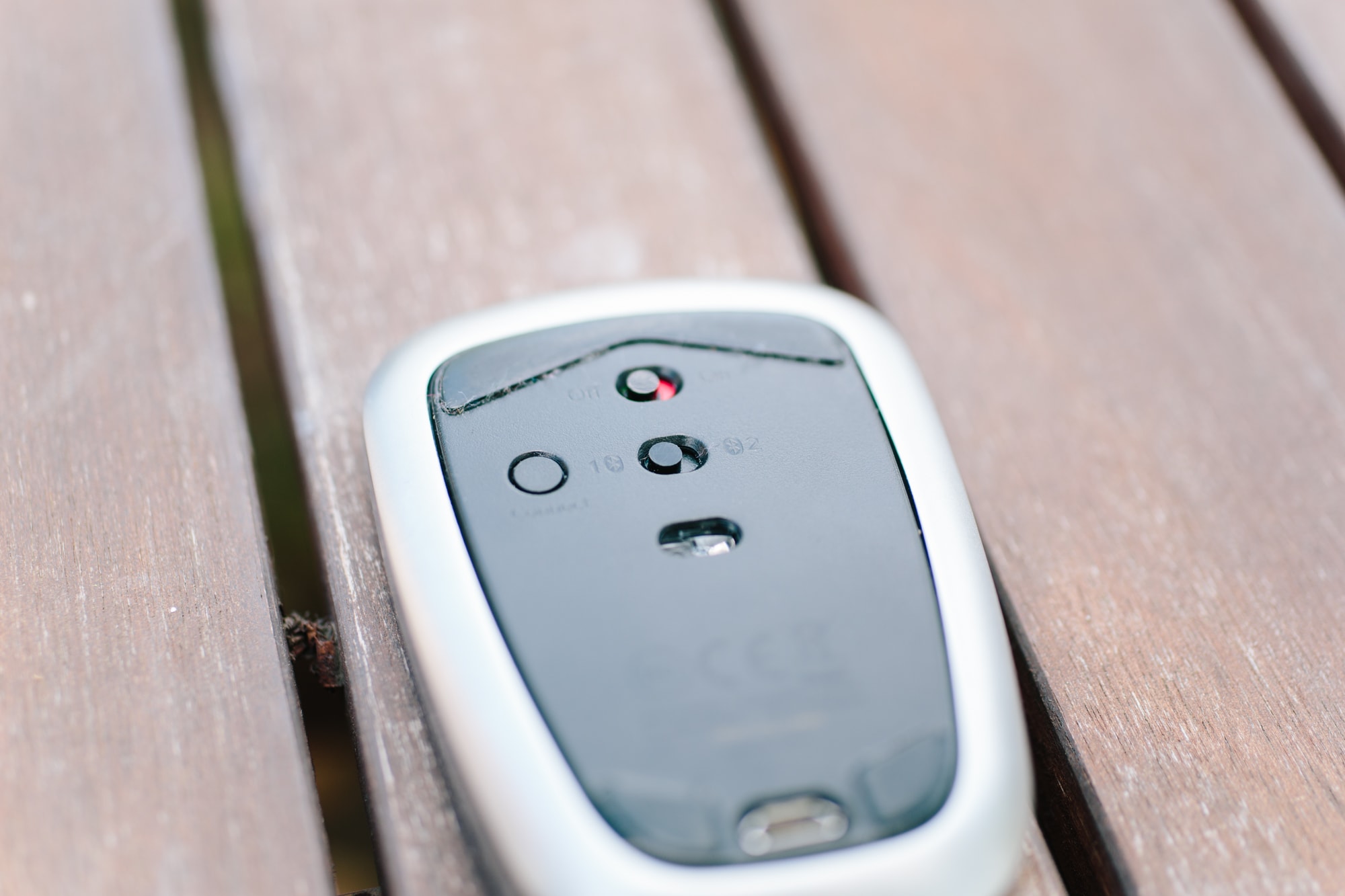 It feels premium, and it has a satisfying click and smooth drag.

I have two issues with it:

Look, I’m happy it has a rechargeable battery. I’m not happy they put the port on the bottom of the device so you can’t use it while it’s charging. Sometimes you forget to plug it in before signing off for the evening, and you have to carve out time for it to charge the next time you want to use it.

I’m lucky because I have a laptop with a working trackpad, I don’t know how desktop users would handle this without chucking it out the window. 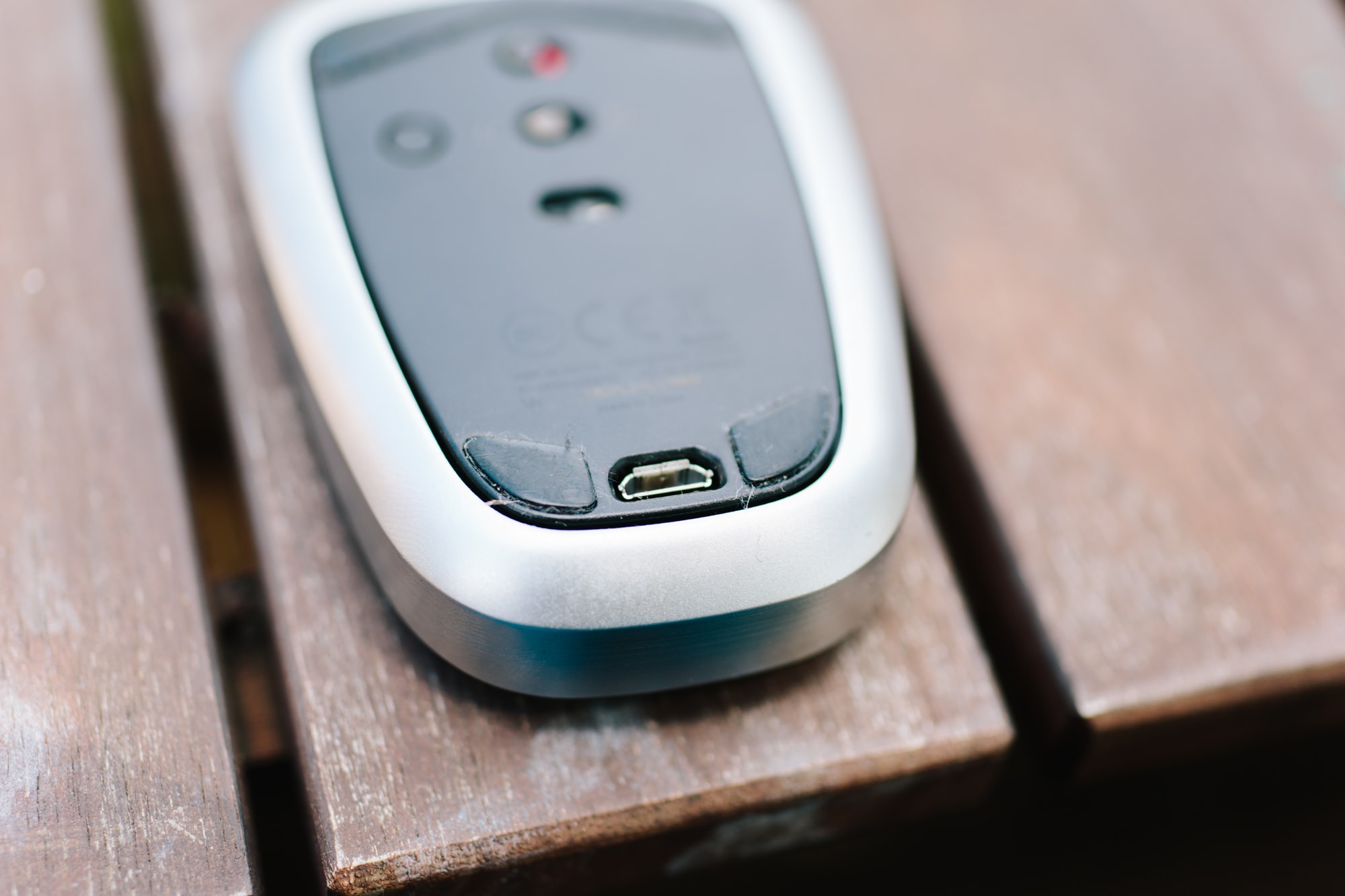 It’s fine, honestly. I get more than a handful of days out of it, up to a few weeks of light use, and it charges pretty quickly via USB. If they had made it bigger, maybe the battery could have been bigger too. 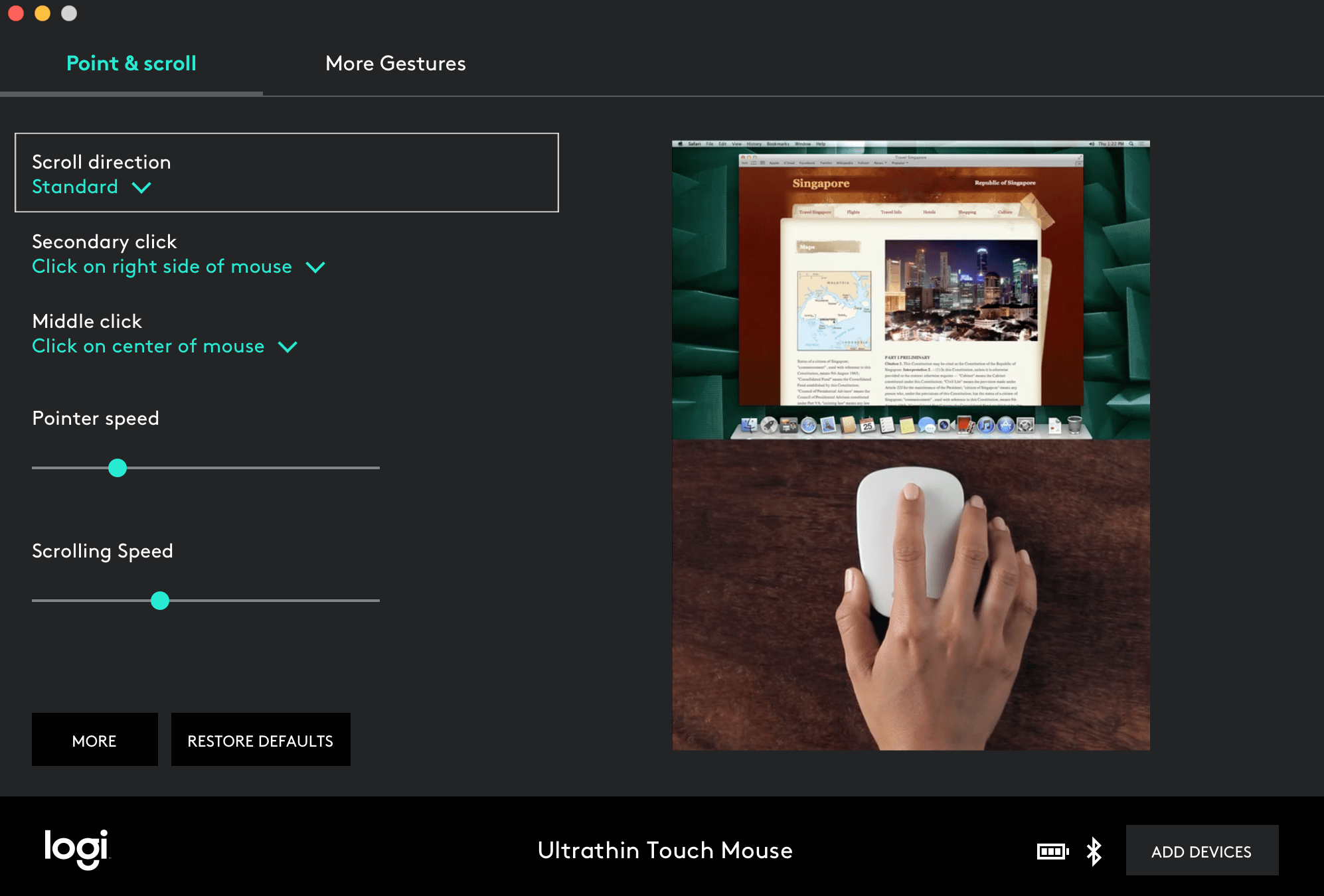 Like I said, this mouse was designed for Windows, but luckily it works really well with Mac as well. Logitech has even made software for it so you can tweak the gestures and see the battery level.

The software couldn’t be easier to use, and luckily I haven’t really had to open it since I first set up the mouse. Painless.

On Amazon, the Logitech Ultrathin Touch Mouse T630 is a fraction of the cost of the Apple Magic Mouse II (currently $76.50 on Amazon), and it does pretty much all the same things. It might not be as comfortable (as it is smaller), but saving that money is great when you need to buy diapers and milk.

A solid design, a solid battery, and just a couple of minor inconveniences, the Logitech Ultrathin Touch Mouse T630 is worth the $69.99 from Logitech, or $38.66 on Amazon. You can even drop that price lower and snag a refurbished one for about $30.

Before I go, how the hell does it make sense to sell it for $70 on your website, but $38.66 on Amazon? They should be mindful of the cost and at least try to price match across sites, right? Oh, and the “Mac” version of the mouse (it’s white, that’s the only difference) is over $50 on Amazon.