TL;DR: With smart scheduling features, a clear picture, and a basic free cloud saving feature, the brand new Indoor Smart Home Camera from Kami  has the smarts you want for a decent price.

Note: GoGoDadget received a Kami Indoor Smart Home Camera for free in exchange for an open and honest review, and they are sponsoring this post. We are one of the first to be able to do a review on the unit, and we jumped at the opportunity to bring you the latest. All thoughts, opinions, and the review as a whole have not been influence by Kami (a new brand from Yi) in any way.

OK, here’s the deal: We have plenty of Alexa-enabled devices in our home, and even one Google Home Mini. We’re cool with that for some reason, even though they’re always listening. With indoor home security cameras, instead of safe, we usually feel vulnerable if it isn’t saving directly to a card and not some sort of cloud. We’re supposed to feel secure, but the technology is still relatively new enough that we’re apprehensive. But, it would be dumb not have some sort of protection.

We have multiple video systems in place — a Ring doorbell, an Arlo Camera System, and we did have a SMANOS alarm/indoor camera before the whole unit just… died on us. Kami is the first camera we’ve welcomed into our home in a while, and it has some really great features to put us at ease. In fact, it’s intuitive enough that I have no trouble saying it’s one of the best I’ve ever used — and I’m not even taking full advantage of what it can do (more on that later). 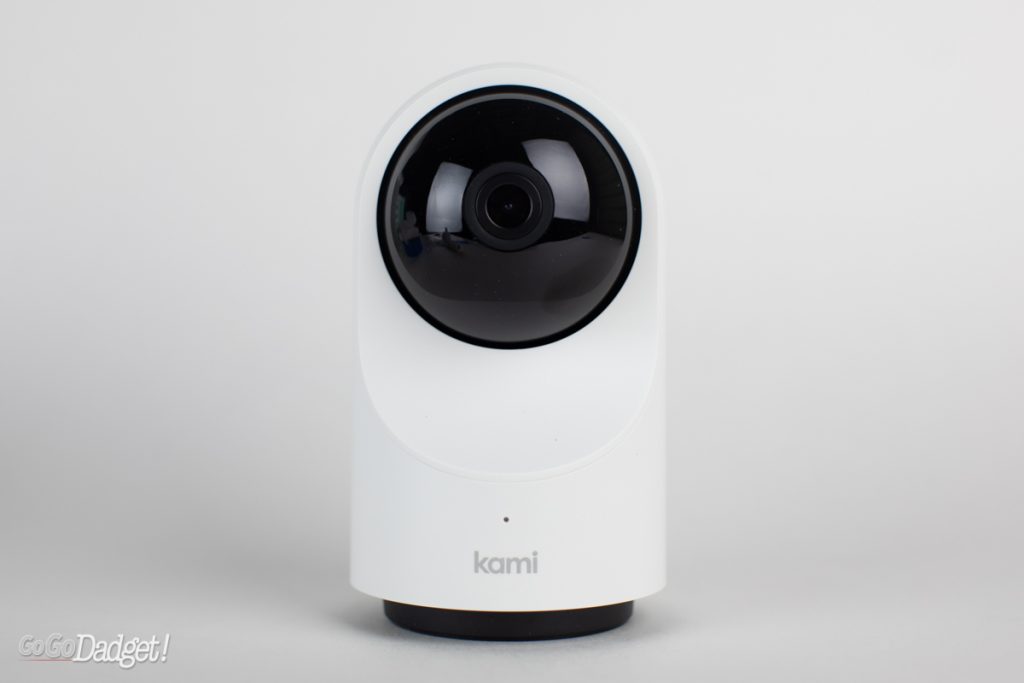 The Kami Indoor Smart Home Camera is a little white rounded guy that sits nicely on a shelf, mantle, or anywhere you’d like — and it swivels around to see what’s going on. Like, the whole way around: 360 degrees of rotation.  Granted, if you’re placing it out of the way it won’t need to see behind itself, but it’s nice to have.

One of my only gripes is that it looks like a security camera. Kami did the best in making a security camera look soft and friendly, but at the end of the day it doesn’t exactly blend in to its surroundings. It’s not ugly, but it definitely isn’t a part of the decor, if that makes sense. It’s great that it isn’t huge, because it’s easy to forget that it’s there after a while. 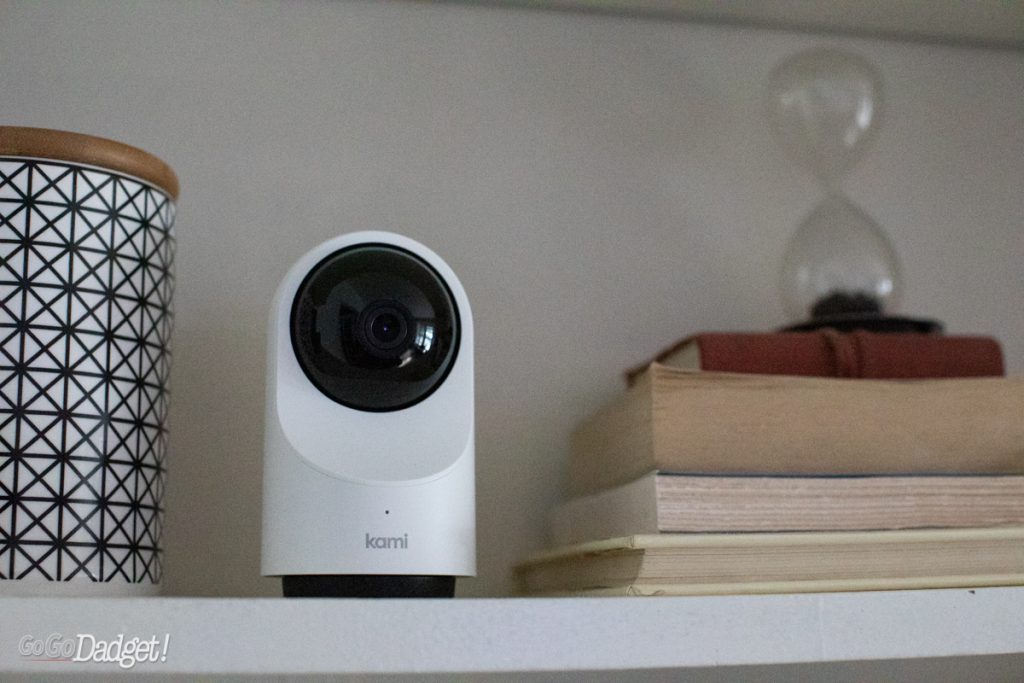 The Kami Indoor Smart Home Camera has just one port: micro-USB for power, and comes with an attachment so you can hardwire an ethernet cable to it if your wifi sucks. I just wish it had a micro SD slot for local storage too. 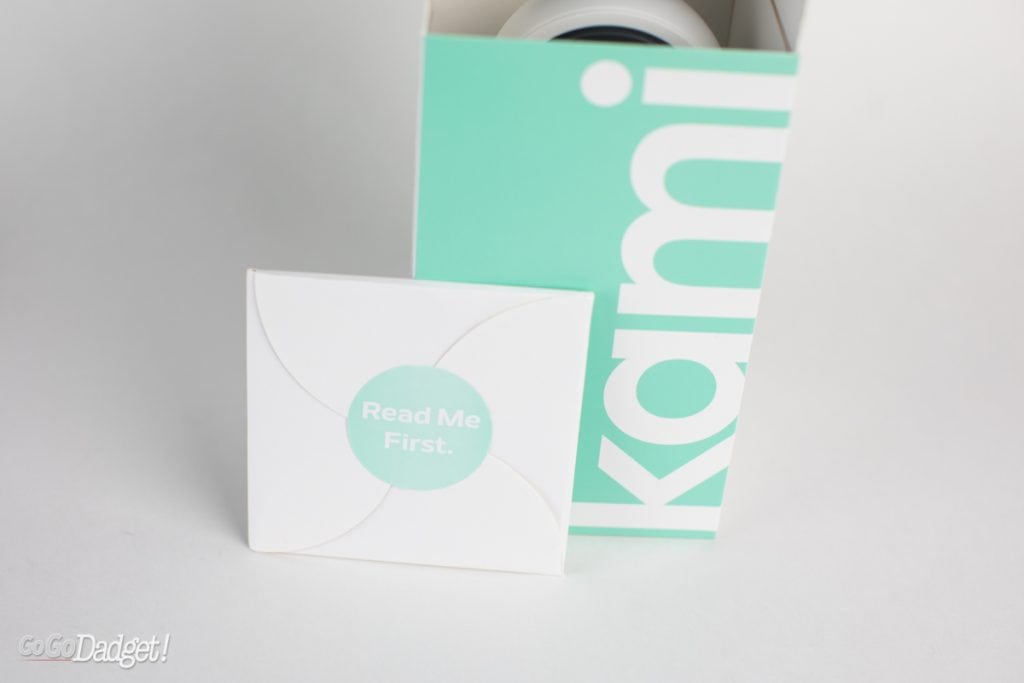 It has a friendly little voice that tells you the status of what’s going on with the camera while you set it up in the app. I had it up and running in less than 10 minutes, including a firmware update and reboot. The hardest part of it all is just figuring out where to put it so it has an outlet, and doesn’t stick out too much with the vibes of your house — granted, it’s easier to find a location when you don’t have to worry about angle, due to the thing being able to see all around itself. 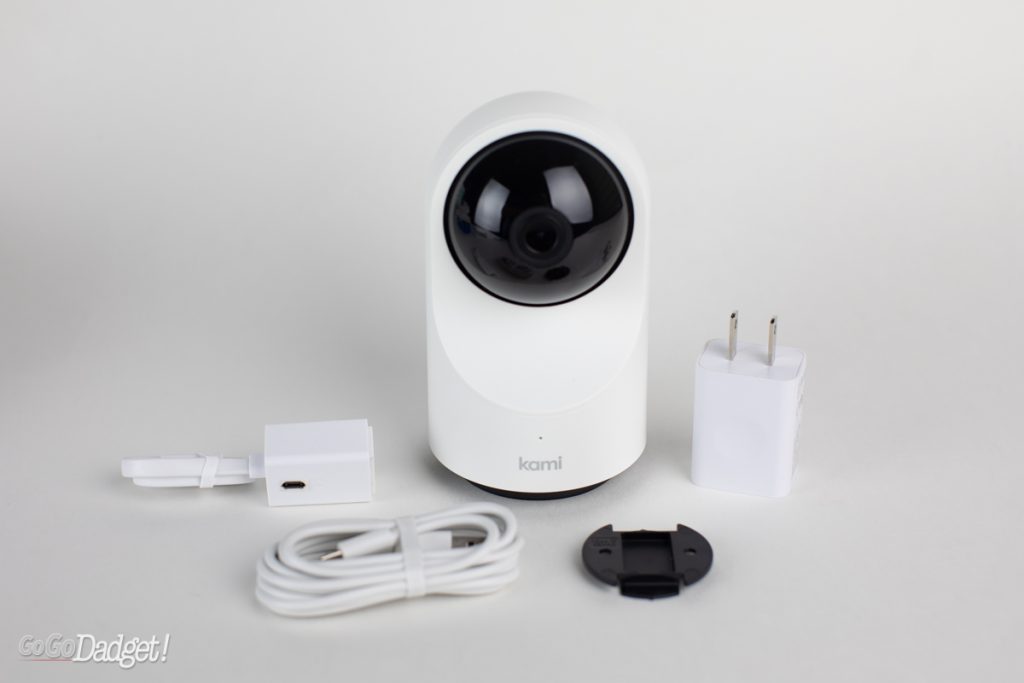 If you’re using the Kami Indoor Smart Home Camera right, you won’t even know you’re using it. You’ll forget about it, and trust that it’s just doing its job.

It has an incredible amount of abilities right out of the box that you don’t have to pay extra for. It has some incredible AI features like Person Detection, Activity Zones, Rich Notifications, and even a Crying Baby Alert. Remember when I said I wasn’t even using all the features? We’re about 2 years too late to really test the Crying Baby Alert, and we don’t even have friends with newborns right now to give it a shot. We’ll have to update you on this if we can figure out how to test it without pretending like a baby crying ourselves. 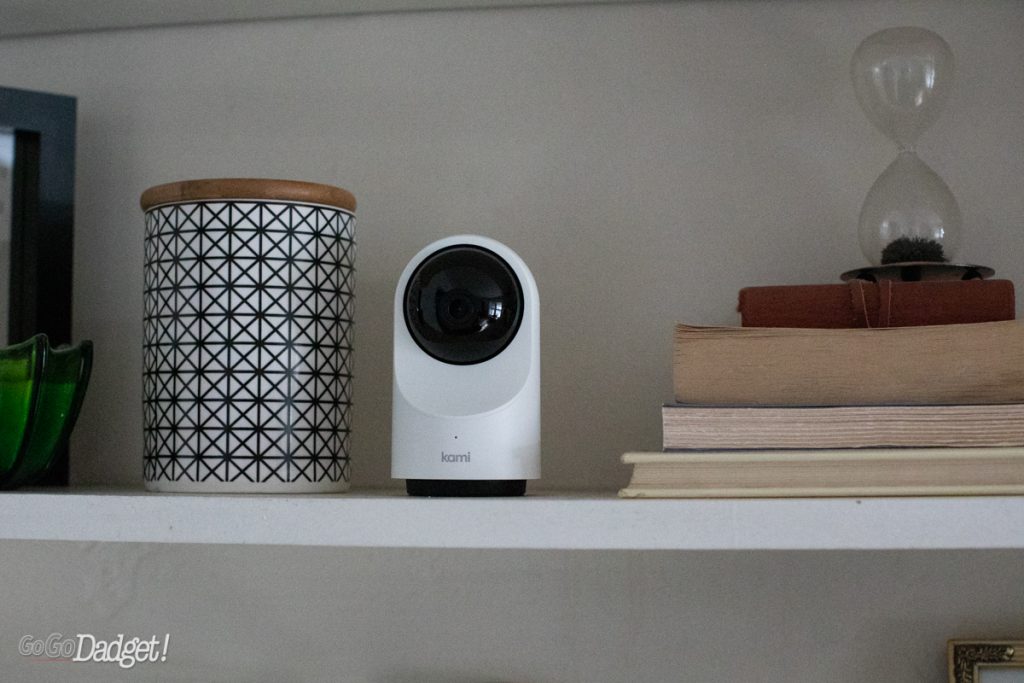 All of these things work, too, though one night it detected our cat, Comet, as a person. Maybe it saw a ghost behind the cat? I don’t know, but it was probably just a coincidence.

My absolute favorite part of the camera, though, is the ability to schedule shut-offs and starts. Right now, so it doesn’t feel like we’re constantly being filmed during the day, I have it turning on at 10pm and shutting down at 6am. We’re usually home during the day and don’t need it recording us — we have outdoor camera alerts to help with that — but I can really see us using the Kami most at night and when we’re out of the house. It’s as simple as scheduling in the app. 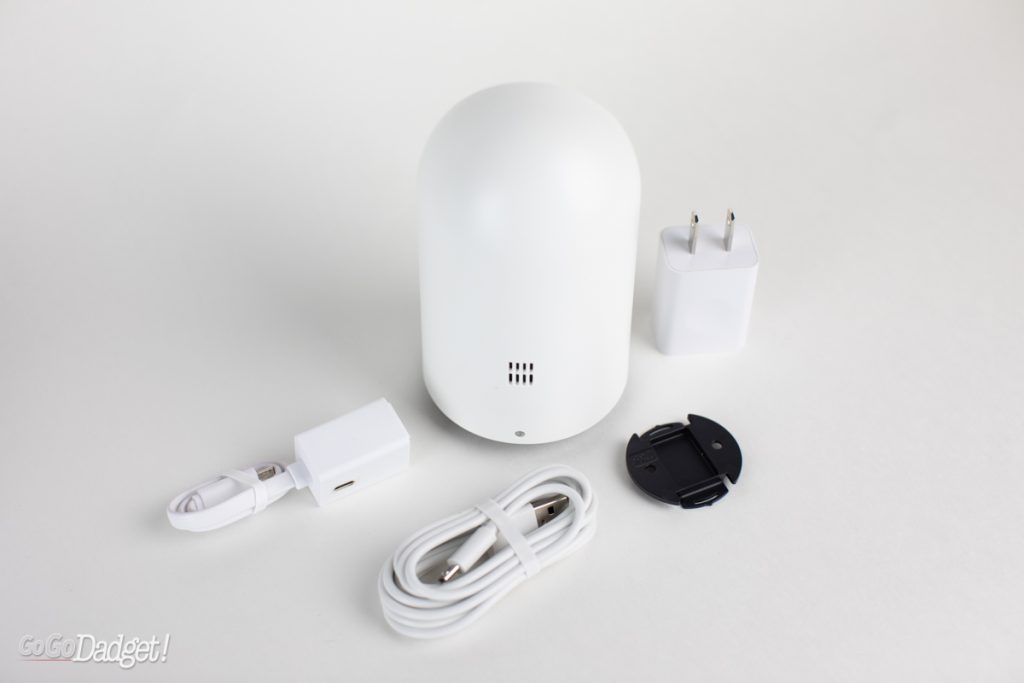 Remember when I said we were just generally worried about security with indoor cameras? Shouldn’t a camera make you feel, you know, more secure? Well, Kami goes the extra length and uses Microsoft Azure to protect the data at a business-quality level. According to Kami, it even “surpasses the highest US and European data privacy requirements,” so while we’re still cautious, that’s nice to hear.

The Kami app is easy to use, but it took me a lot of time to figure out how to download a recording — it was only through chance that I realized that you have to load the video from the cloud, then tap on the video (not on the expand button) and it brings up a little hidden menu to download it. It was seriously by accident that I figured it out, so clarity and instructions could be elevated a bit.

Otherwise, everything is available to watch on a nice little timeline, and alerts are listed in chronological order.

In the Kami App you also have access to all the subscription plans, detections, scheduling, cloud, and live view. You can even use the app to tilt and pan the camera — something Nest cameras cannot do.

The footage quality is great — though I wish it had a higher frame rate. Right now it shoots at 1080p at 20fps, which is good enough, but 30fps would be really, really nice for smoothness and clarity. It’s not a necessity — and they do it to help keep the files smaller and save space — but I would have loved to see that frame rate bumped.

Here’s an example of night footage (above). Warning: it’s not exciting at all, and that’s a good thing. I hope I never have to use recordings for sad reasons, like a break-in or insurance claim. 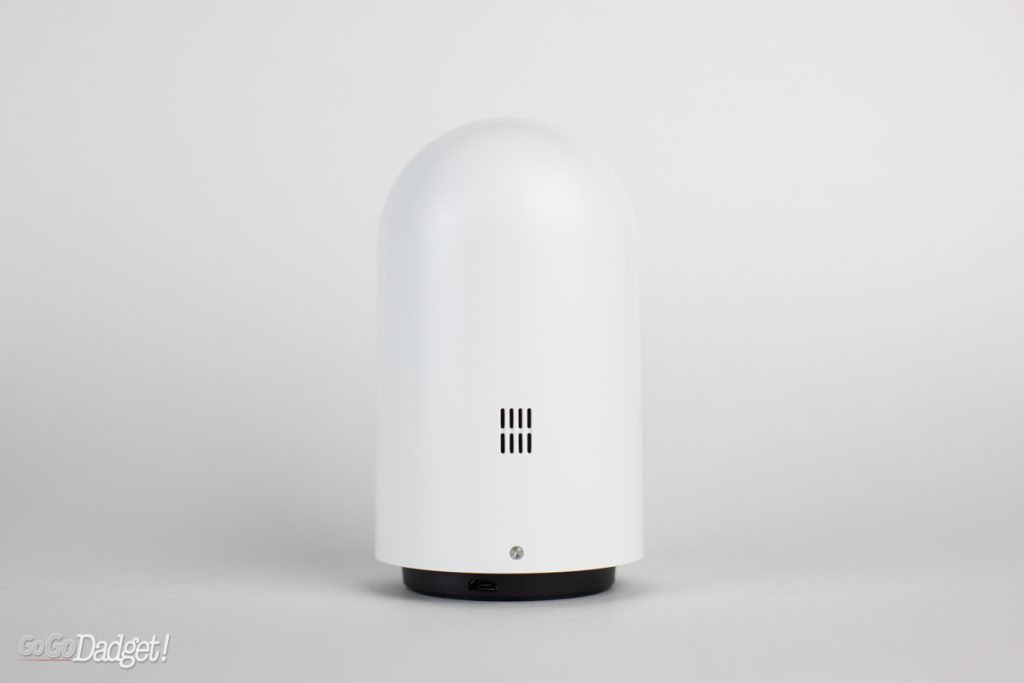 Just to be clear, here are the downsides: 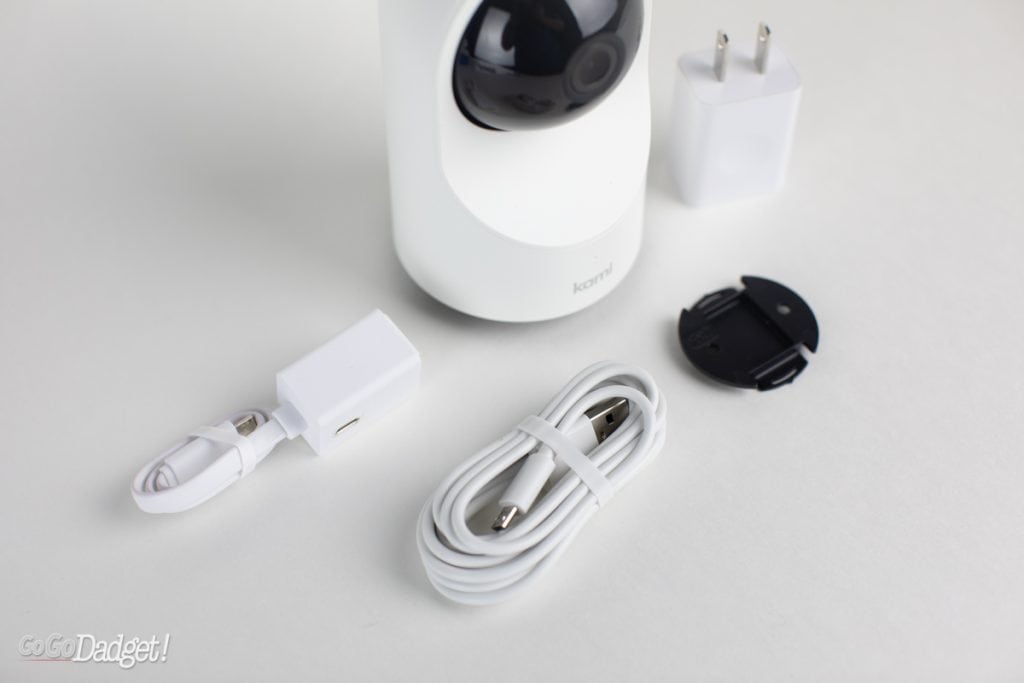 At the time of publishing, the Kami Indoor Smart Home Camera is $142.50 on Amazon. At this price, you’re getting a lot of really cool tech out of the box — app swivel control, 360 degree view, smart tracking, AI alerts, etc. I only wish you could record footage locally to an SD card in addition to using the cloud services.

On top of this, it looks like a security camera, and doesn’t blend in super well with decor — though I’m pretty sure there are limits in doing so, and that means Kami did the best they could. It’s a handsome little unit for what it is.

Setup is also super easy, and so is the app — once you figure out all the hidden tricks to use it to the full advantage.

Is it worth it? Yeah, I think so! Especially if you have a baby. Plus being able to schedule shut-off and start-up times is really, really great for anyone worried about inviting a camera into their house. Visit Kami’s website for more information!